Rookie Christian Watson has made the end zone a very familiar place for Green Bay in the span of five days. 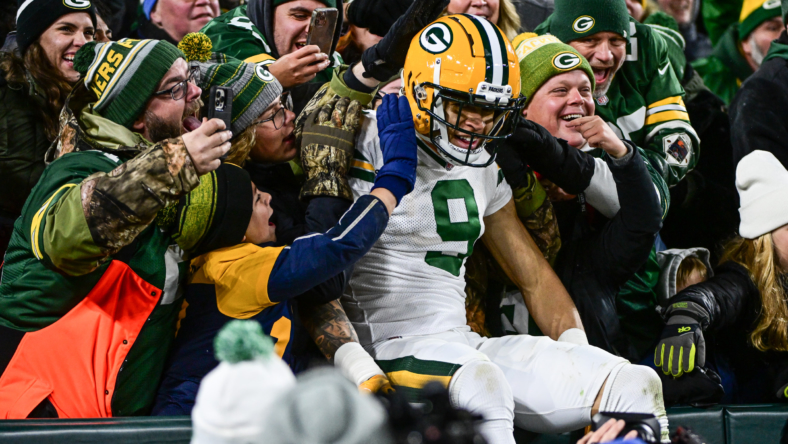 Green Bay Packers wide receiver Christian Watson started his rookie campaign on shaky ground right off the bat. Quite literally, in fact. On the Packers’ very first offensive play of the season in their opener against the Minnesota Vikings, the 23-year-old out of North Dakota State dropped what would have been a 75-yard touchdown bomb from Aaron Rodgers that left the back-to-back MVP looking like he might never want to throw Watson’s way again.

When you fast forward to the conclusion of an ugly Week 9 loss to the Detroit Lions, not much had changed. The rookie had hauled in a mere eight catches for 54 yards since making his NFL debut. Disappointing, to say the least.

Was he in the doghouse? Probably. But everyone including Aaron Rodgers has taken a seat in the doghouse at one point or another this season. Many have opted to stay there.

To be completely fair to Christian Watson, he did miss two games during that stretch due to a hamstring injury. On top of that, he was also competing for targets with fellow promising rookie Romeo Doubs and two favorites of Rodgers, the reliable and familiar duo of Allen Lazard and Randall Cobb.

While Cobb has been injured since Week 6, it’s been a crowded wide receiving corps since the very first snap. Though, not necessarily one that was showing any semblance of rhythm. But that’s pretty much been the signature ongoing theme with nearly every aspect of the 2022 Green Bay Packers.

However, following the aforementioned loss to Detroit that saw Doubs go down with an injury, it was as if the Packers had suddenly been gifted with a brand-new version of Watson.

Christian Watson has burst onto the scene as a touchdown machine

Facing a very good Dallas Cowboys defense, Watson put on an explosive Week 10 performance as if this were the type of thing that had been happening on a weekly basis. Oozing with confidence, his final line was four catches for 107 yards and three touchdowns.

The cherry on top was a perfectly crafted backflip that felt like this touchdown routine might seriously become a regular thing.

With Doubs and Cobb both being out, it obviously allowed Watson a clear opportunity to thrive. But that surely didn’t mean he would. Alas, he has, and then some.

Following up on his “remember the name” performance against the Cowboys, just four days later on Amazon’s “Thursday Night Football” against the Tennessee Titans, the rookie was at it again. This time, adding two more TDs to his rookie resume.

If Chris Berman were still doing highlights on a regular basis, he’d be screaming “all this guy does is catch touchdowns!” And he wouldn’t be wrong because in Watson’s stat line in Week 11 against Mike Vrabel’s Titans, his final tally was just four catches.

When you process this outrageous output over the last five days, it’s truly become a wild ratio considering just six — yes six — days ago Watson had a grand total of zero trips to paydirt. Now? He leads all rookies with five touchdowns, firmly placing the sudden red zone machine in the mix for NFL Rookie of the Year.

Nevertheless, should Christian Watson continue at this stampede of a pace for the final stretch run, he might very well leave voters with no choice and improbably steal the award.

On somewhat of a sad note, winning the award would end up being by far and away the brightest spot of what has otherwise been a highly unexpected, atrocious season from the now 4-7 Green Bay Packers. A team firmly looking at the NFC playoff race from the last seat in the upper deck.