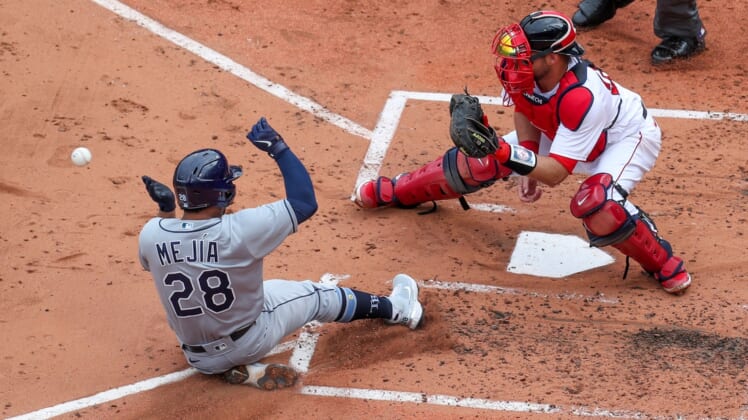 Shut out for the first three innings, the host Boston Red Sox erupted for nine runs in the next two and swept the Tampa Bay Rays with a 9-2 win at Fenway Park on Wednesday afternoon.

Christian Vazquez was 2-for-4 with a homer and three RBIs for the Red Sox. In the three-game sweep, Boston outscored Tampa Bay 26-9.

Vazquez then gave Boston the lead for good as he plated Devers by driving a 1-2 pitch over the Green Monster for a 3-1 lead.

Boston’s bats were on fire in the fifth with the Sox tacking on six more runs — all with two outs in the inning.

With two on, J.D. Martinez drove in two with a double to left, and he came home on a single from Vazquez to make it 6-1.

Martinez now has multiple RBI in his past four games and is the first Boston player since David Ortiz (2005) to record at least one extra-base hit in each of his first six games of a season.

The big blow to Yarbrough and the Rays in the fifth was a throwing error from shortstop Willy Adames which allowed Hunter Renfroe to reach second and two more runs to cross.

Christian Arroyo ended the deluge of runs with an RBI double.

Yarbrough (0-1) finished the fifth inning but did not return. He gave up nine runs (six earned runs), nine hits, one walk and struck out two.

Boston starter Nathan Eovaldi (1-1) gave up one earned run off three hits in seven innings. He struck out seven and walked three.

Bogaerts was 3-for-3 and scored twice for Boston, which had 13 hits.

Tampa Bay got on the board in the top of the third when Francisco Mejia doubled and then scored on a two-out single from Yoshi Tsutsugo.

The Rays’ final hit of the day was a single to right from Mike Brosseau with two outs in the ninth to bring home Arozarena.