Christian Pulisic came off the bench and scored in the 74th minute and Weston McKennie added a goal in the 85th minute as the United States defeated Mexico 2-0 Friday night in a World Cup qualifier in Cincinnati.

Zach Steffen made four saves to post the shutout for the U.S. (4-1-2), which moved past Mexico (4-1-2) atop the CONCACAF qualifying standings via goal differential halfway through the 14-game tournament. The U.S. has scored seven more goals than it has allowed, while Mexico is at plus-5.

Pulisic came on in the 69th minute for Brenden Aaronson after a skirmish near the sideline resulted in three yellow cards.

It didn’t take long for Pulisic to get what proved to be the winner on a chilly and wet night at TQL Stadium, home of FC Cincinnati. 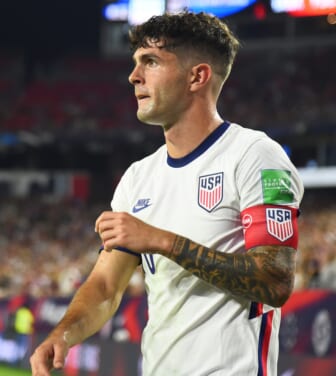 Tim Weah, the son of former Ballon d’Or winner George Weah, drove the ball down the edge of the 18-yard box on the right wing and sent a cross for Pulisic. The Chelsea standout outmuscled a defender to get to the ball and put a strong header from about 3 yards out past Mexico goalkeeper Guillermo Ochoa.

Pulisic hadn’t played for the U.S. since sustaining a sprained ankle in a World Cup qualifier at Honduras on Sept. 8. He was sidelined until coming off the bench for Chelsea in a Champions League match Nov. 2 at Malmo.

McKennie doubled the advantage by putting a 10-yard shot from the right-center of the penalty area inside the far post, having regained control of the ball after his pass was blocked by a Mexico defender.

The U.S. had to play the four minutes of second-half stoppage time short-handed after Miles Robinson received his second yellow card and was ejected in the 89th minute.

The skirmish in the 68th minute came after Aaronson was knocked to the ground by Mexico’s Luis Rodriguez, who seemed to claw at Aaronson’s face as he went down. McKennie immediately came over and pushed Rodriguez away, and Steffen later ran past midfield to jaw with referee Ivan Arcides Barton Cisneros, who carded all three players. That means McKennie will have to miss the next match, Tuesday at Jamaica, due to yellow-card accumulation.