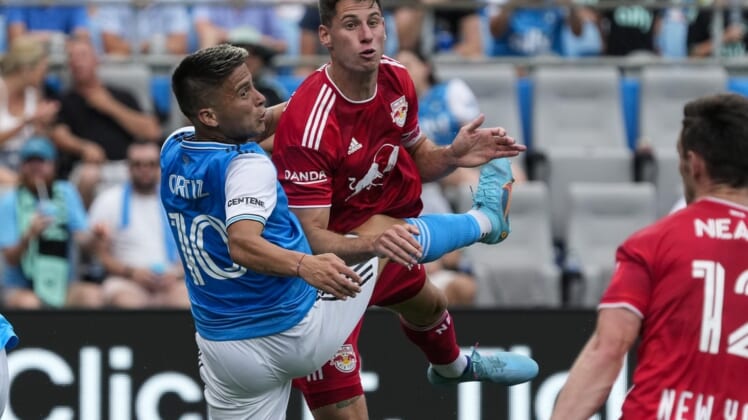 Ben Bender’s goal in first-half stoppage time Saturday afternoon proved to be the game-winner for Charlotte FC in their 2-0 win over the New York Red Bulls.

Derrick Jones confirmed the outcome by tapping in a feed from Sergio Ruiz in the 91st minute. It was Jones’ first goal in MLS in his 68th career game and Ruiz’s first MLS assist.

In the dying seconds of the first half, Tito Ortiz found Bender who got his leg up high and spun to control the ball before settling and firing a shot. The on-frame blast deflected off of Red Bulls defender Tom Edwards and past keeper Carlos Coronel for Bender’s third MLS goal.

Going into the game, Charlotte had only scored 13 league goals, tied for worst in the league, but had been a much different team playing at home. Saturday’s outcome was their sixth victory in their past seven home games, although they remain winless on the road this season.

The Red Bulls (6-4-5, 23 points) had a chance to tie the score early in the second half when Ashley Fletcher, a halftime substitute, was awarded a penalty after a sliding challenge in the box from Guzman Corujo. However, VAR reviewed the challenge and advised referee Guido Gonzales Jr. to take a second look … upon review, Gonzales reversed the penalty.

Corujo played an important role in the Charlotte backline making key tackles in the early part of the second half and stonewalling Patryk Klimala in the box.

Coronel helped keep the game from a bigger loss for New York, making three saves on five shots on target, including two big saves after 80 minutes gone in the game.

His Charlotte counterpart, Kristijan Kahlina, made one save on the only shot on target he faced in the game.

The Red Bulls looked strong in the first 10 minutes of the game, pressing Charlotte aggressively and giving them fits. However, the hosts were able to work into the game and dominate it for stretches, finishing with 61% possession, and were more accurate with the ball, completing 79% of their passes to the Red Bulls’ 68.3%.