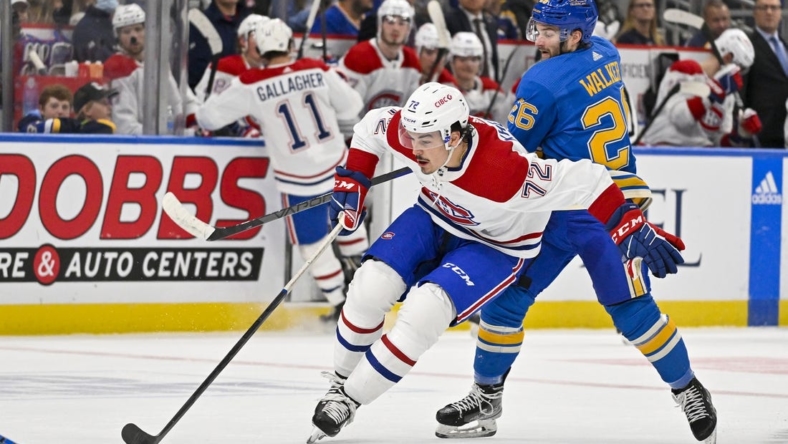 Cole Caufield scored twice, Nick Suzuki and a goal and three assists and Juraj Slafkovsky also scored for the Canadiens, who erased a 3-1 deficit while winning for the fourth time in six games.

Winning goaltender Jake Allen made 26 saves and earned an assist.

The Blues struck first when Kyrou scored 7:47 into the first period. Schenn snapped a shot that a leaping Kyrou deflected between Allen’s pads.

The Canadiens tied the game 1-1 when Jordan Harris fired a shot from the left point that deflected off Suzuki, then off Blues defenseman Nick Leddy into the net.

The Blues took a 2-1 lead at the 5:10 mark of the second period. Allen stopped Tyler Pitlick’s point-blank shot, but Acciari knocked in the rebound.

Kyrou made it 3-1 less than five minutes later with a power-play blast from atop the left circle off Faulk’s cross-ice pass.

But the Canadiens responded by scoring three straight goals in less than five minutes to move ahead 4-3.

First Suzuki slapped the puck off the end boards and into the left circle to Caufield, who scored into the empty side of the net. Slafkovsky tied the game 3-3 with a one-time power-play blast from atop the right circle, then Caufield scored on another power play by converting Suzuki’s cross-crease pass with 4:14 left in the period.

Dvorak scored 41 seconds into the period when fired a cross-crease pass toward Kirby Dach that caromed into the net off Leddy. Just 40 seconds later, Dvorak scored again by deflecting Josh Anderson’s shot from the center point.

Tarasenko cut the lead to 6-4 after Robert Thomas sent him in alone on Allen, but Dvorak’s empty-net goal made it 7-4.