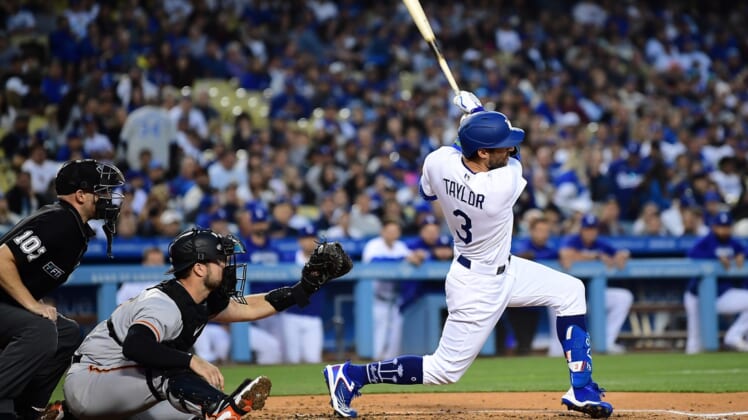 Julio Urias went six scoreless innings and Chris Taylor hit a two-run single as the Los Angeles Dodgers got the best of the visiting San Francisco Giants 3-1 on Tuesday in the first game of the season between the National League West rivals.

Craig Kimbrel recorded his fifth save in five chances as the Dodgers improved to 3-1 on a brief five-game homestand that ends with another meeting against the Giants on Wednesday.

The teams met for the first time since last season’s playoffs when the Dodgers eliminated the Giants in a deciding fifth game of their NL Division Series. It was the first-ever meeting in the playoffs between the clubs.

Carlos Rodon gave up just three hits in six innings but lost his first game in a Giants uniform in his fifth start. Thairo Estrada and Austin Slater each had two hits for San Francisco, which lost for the fourth time in its past five games.

The Dodgers scored their first two runs in the second inning off Rodon on their first hit. Max Muncy and Cody Bellinger reached base on walks before each advanced on a wild pitch. Taylor singled to center for a 2-0 lead.

Urias (2-1) gave up four hits in his six scoreless innings with no walks and four strikeouts and has an 0.82 ERA over his last four starts.

The Giants scored in the seventh inning after Wilmer Flores led off with an infield single and went to second on a throwing error by Justin Turner. Flores went to third on an Estrada ground out and scored on a Luis Gonzalez fly ball.

The Dodgers tacked on an insurance run in the eighth when Hanser Alberto doubled, went to third on a Mookie Betts single and scored on a wild pitch by Giants left-hander Jose Alvarez.

Kimbrel had two aboard in the ninth when he closed out his 377th career save to tie Joe Nathan for eighth all-time.