Fresh off a standout postseason run and a great season on the whole, Chris Taylor is a compelling free agent option for every MLB contender and team in general.

Taylor has come into his own as a consistent player with a compact swing who’s playing the best baseball of his career. He’s a sturdy hitter who’s fluent and/or has extensive experience at second, third, shortstop, left and center field with the Los Angeles Dodgers. He can probably juggle, too.

To recap: Taylor has a lot going for him. Here are three ideal free agent destinations for Chris Taylor.

3. Philadelphia Phillies get a Swiss army knife in Chris Taylor

The Phillies have a lot of intimidating hitters, but they also have holes on their depth chart. Taylor helps the team across the board.

With Andrew McCutchen and Odubel Herrera free agents, the Phillies need an outfielder, if not two. Taylor, of course, can play both positions. He gives the Phillies a threat from the right side who runs the bases well and adds another sturdy bat to an offense that includes 2021 National League MVP Bryce Harper, Rhys Hoskins and J.T. Realmuto.

The Phillies have question marks at two infield positions. Can shortstop Didi Gregorius stay healthy and be consistent at the plate? Will Alec Bohm bounce back from a rough season at the hot corner? Taylor plays both positions and could play second if Jean Segura moves to shortstop in a pinch.

Philadelphia would get its everyday left or center fielder who would dabble in the infield if and when injuries present themselves in Taylor. The team gets an answer in the grass and a utility player all rolled into one.

All that being said, money could get in the way of Taylor and the Phillies joining forces. Last offseason, the Phillies supposedly took their payroll to extremes by re-signing Realmuto and Gregorius, and extensions for essential home-grown players like Hoskins and Aaron Nola could be on the horizon.

The Tigers have a prosperous program. They got the free agent party started last week, signing left-hander Eduardo Rodriguez to a five-year deal. Detroit can continue the show by signing Taylor, who would be a sneaky-good fit in manager A.J. Hinch’s depth chart.

In this scenario, Taylor likely sees a lot of time at shortstop, which has been a revolving door for the Tigers in recent memory. At the same time, Taylor can bounce out to left field, as Robbie Grossman is adept at playing both corner outfield positions.

The Tigers have some offensive pop, which Taylor would add to, but they could also use players who are going to smack singles and doubles. Although he can strike out a little too much, Taylor would add a multipurpose hitter to the Tigers’ order.

Taylor’s defense and versatility in that regard may be his greatest asset. A defensively sound infield can go a long way for a ballclub. Some of the best teams in the sport have prolific defensive infields. The World Series-champion Atlanta Braves, Tampa Bay Rays, Los Angeles Dodgers and San Francisco Giants fit that description and all participated in the Divisional Series Round this past season.

Playing alongside Jeimer Candelario, Jonathan Schoop and potentially Spencer Torkelson, Taylor would move the Tigers a step closer towards that defensive echelon. However, the Tigers may choose to go for the kill on the free agent market, signing someone who’s going to specifically play one position for the next five-plus years, as opposed to a likely short-term veteran complement.

1. Chris Taylor fills a hole for the Washington Nationals

The Nationals need another outfielder, as well as players who field their positions well, as they have an overall young positional depth chart. Taylor would be a savvy fit on the Nationals.

Uncertainty abounds for the Nationals at left, third, second and shortstop. Naturally, Taylor can get reps at all four positions with a focus on playing in the outfield grass. If one of infielders Carter Kieboom, Luis Garcia and Alcides Escobar struggle or in the case of Kieboom and Garcia fail to progress, Taylor can move to the infield. 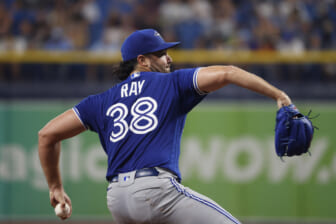 Washington has a plausible offense and a handful of young players with upside like Garcia, Lane Thomas and Keibert Ruiz. Manager Dave Martinez needs a proven commodity or two to help take his new-look offense to the next level, more specifically players who will drive in runners on the basepaths.

Given their abrupt payroll flexibility, it’s feasible to think the Nationals can make a couple of hefty, two-to-three-year signings for their offense, one of which being Taylor. The starting rotation will likely come from within over the next couple years, as they have a handful of top prospects at or near the big-league level. In other words, the moves to be made for the Nationals are in the batting order.

The Nationals can give Taylor, who has already won a World Series, an enticing contract while getting him closer to home (Taylor grew up in Virginia Beach and attended the University of Virginia) and putting him in a position to be a veteran leader for a transitioning ballclub.