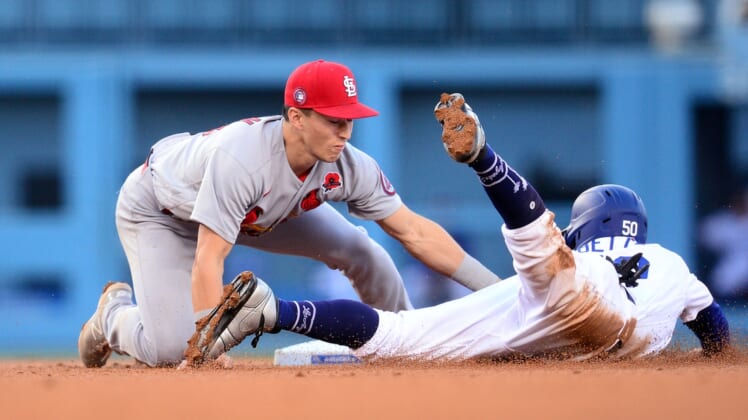 Chris Taylor hit a home run and delivered a three-run double on a 14-pitch at-bat and the host Los Angeles Dodgers rallied for a 9-4 victory Monday in the opener of a three-game series against the St. Louis Cardinals.

Gavin Lux hit two home runs for the Dodgers, but Taylor’s sixth-inning duel against Cardinals left-hander Genesis Cabrera in a tie game made the difference. The Dodgers ended a three-game losing streak that came after they won nine of 10.

St. Louis right-hander Jack Flaherty, a Los Angeles-area native who went to nearby Harvard-Westlake High School, gave up two runs on two hits over five innings with a walk and nine strikeouts. He left the game early with tightness in his left side.

Flaherty now has a 1.50 ERA and 29 strikeouts in three career starts at Dodger Stadium.

The Dodgers took a 2-0 lead in the second inning when Lux and Taylor hit home runs. Lux hit his fourth while Taylor hit his seventh. Taylor doubled in the eighth for his third extra-base hit.

The Cardinals jumped in front 3-2 in the sixth with Williams’ fourth homer of the season and Carlson’s fifth, a two-run shot.

The Dodgers loaded the bases with one out in the sixth inning before Will Smith walked to bring home the tying run. Lux struck out looking before Taylor’s marathon at-bat against Cabrera. Taylor stayed alive with nine foul balls before clearing the bases with a double to right-center. Right-hander Ryan Helsley (3-3) recorded just one out and took the loss.

Lux added his fifth of the season in the eighth inning, the second multi-homer game of his young career. Matt Beaty (single) and Mookie Betts (double) drove in runs for a 9-4 advantage.

The Cardinals lost their second consecutive game after a four-game winning streak and are 4-4 on their 10-game road trip.