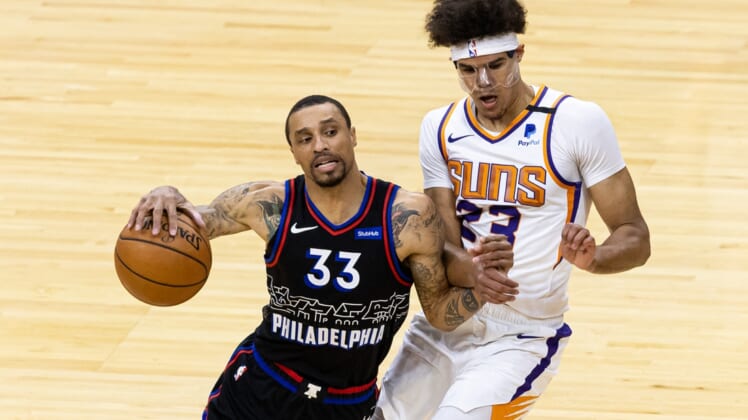 Chris Paul compiled 28 points and eight assists to lift the Phoenix Suns past the host Philadelphia 76ers 116-113 on Wednesday.

Devin Booker added 19 points and Mikal Bridges had 18 for the Suns. Booker had scored at least 30 in each of his past seven meetings with the Sixers.

Cameron Johnson contributed 15 points and DeAndre Ayton chipped in with 10 for the Suns (42-16), who hold the best road record in the league, 19-7.

The depleted Sixers (39-19) played without Ben Simmons (illness), Seth Curry (hip) and Tobias Harris (knee). It was the third consecutive game that Harris sat out.

The Sixers have lost consecutive home games for the first time all season.

The Suns lost Jae Crowder to a sprained right ankle in the second, and the team announced soon after that he would not return.

Korkmaz appeared to twist his right ankle early in the third as he limped to the bench with 9:25 left, but he re-entered the game.

Embiid responded with a three-point play on the Sixers’ next possession to put the hosts back on top.

Green hit a shot with 0.2 seconds remaining and the game was tied at 54 by halftime.

Hill missed two free throws with 0.7 seconds left and Phoenix led 77-76 at the end of the third.

Johnson hit a tough jumper in the lane to extend the Suns’ advantage to 93-90 with 7:49 to go in the fourth.

When Embiid hit a trey from the top of the key with 4:40 remaining, the Sixers closed within 105-99.