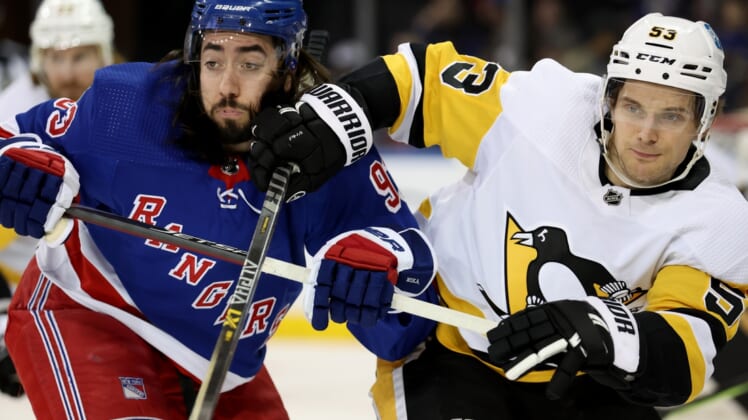 Chris Kreider logged two goals and an assist on Friday for the New York Rangers, who started fast and rolled to a 5-1 victory over the visiting Pittsburgh Penguins.

Kreider scored his 43rd and 44th goals of the season to move into tie with the Edmonton Oilers’ Leon Draisaitl for second place in the NHL. The Toronto Maple Leafs’ Auston Matthews is on top with 46.

Kreider scored the second goal in New York’s three-goal flurry in the opening 4:16 of the game. He added his third career short-handed goal in the second period.

Kreider’s latest big performance helped the Rangers bounce back from a 7-4 road loss to the New Jersey Devils on Tuesday. Third-place New York moved within two points of second-place Pittsburgh in the Metropolitan and within four of the division-leading Carolina Hurricanes.

Alexis Lafreniere and Frank Vatrano also scored in the first period and Andrew Copp tallied in the third for the Rangers. Mika Zibanejad collected three assists.

New York goalie Igor Shesterkin made 20 saves as the Penguins rarely had any prime scoring chances.

Jeff Carter scored as Pittsburgh, which dropped its second straight and fell to 8-3-2 in its past 13 games. The Penguins played without Evgeni Malkin, who was scratched due to a non-COVID illness.

Penguins goalie Tristan Jarry saw his five-game winning streak end as he allowed five goals on 30 shots. He was replaced by Casey DeSmith after Kreider’s second goal but came back in when teammate Brian Dumoulin collided with DeSmith. DeSmith saved all three shots he faced.

New York went up 1-0 when Filip Chytil sped down the right wing and made a cross-ice pass to Lafreniere, who backhanded the puck past Jarry at 2:07.

Kreider made it 2-0 moments after entering the ice on a line change. Zibanejad spotted him coming down the ice, made a lead pass and Kreider finished off a breakaway by lifting the puck over Jarry’s stick inside the left post at 3:58.

Just 18 seconds later, Kreider helped the Rangers take a 3-0 lead. He maintained possession along the left boards while being checked by Pittsburgh defenseman Kris Letang, then moved the puck to Zibanejad. A cross-ice pass from Zibanejad found Vatrano, who lifted a backhander from the high slot into the net.

Kreider made it 4-0 at 6:37 of the second with Pittsburgh on a power play. He finished off a two-on-one with Zibanejad, lifting a wrist shot from the left side past Jarry.

Carter scored a power-play goal at 6:00 of the third period, and Copp capped the scoring at 17:47.