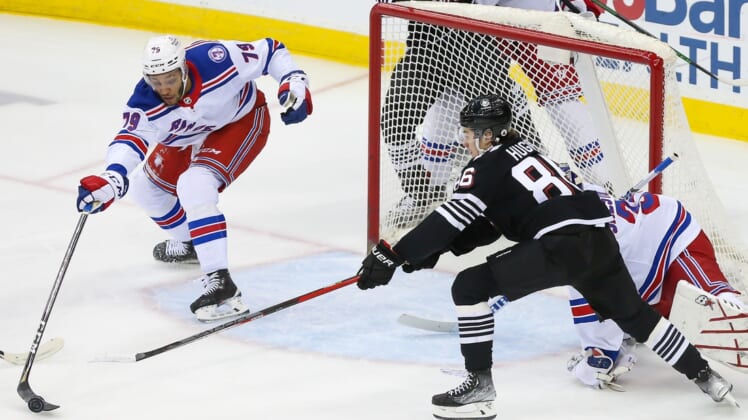 Chris Kreider’s set a pair of franchise records with his go-ahead goal in the first period Tuesday night for the visiting New York Rangers, who snapped a two-game losing streak by defeating the New Jersey Devils 3-1 in Newark, N.J.

Kreider’s power-play goal with 2:03 left in the first was his 25th of the season, breaking a tie for the most by a Rangers player in a single season with Jaromir Jagr. It was also his franchise-best 10th game-winning goal of the season.

Ryan Strome scored earlier in the first period and Justin Braun scored in the third for the Rangers (45-20-6, 96 points), who moved within two points of the first-place Carolina in the Metropolitan Division after the Hurricane lost to Buffalo Tuesday.

New York goalie Alexandar Georgiev made 20 saves in the victory.

Yegor Sharangovich scored in the first for the Devils (24-40-6, 54 points), who announced during the game that star center Jack Hughes will miss the rest of the season with a lower-body injury suffered Sunday.

Goalie Nico Daws recorded 14 saves for the Devils, who have lost four straight (0-3-1).

The Rangers had eight of the first 10 shots in the first period but the Devils tallied first following a turnover at the New York blue line by Jacob Trouba, whose pass was intercepted by Sharangovich before the center descended untouched on Georgiev and beat him with the backhand at the 6:56 mark.

A fight between Sharangovich and Braden Schneider after the latter leveled Jesper Boqvist near the benches generated the power play that led to the first of back-to-back, man-advantage goals for the Rangers. Artemi Panarin passed to Kreider, who was stationed next to Daws. In one motion, Kreider accepted the puck and dished to Strome, who went to one knee and beat Daws from point-blank range with 8:53 left in the first.

A holding penalty on Pavel Zacha led to Kreider’s record-setting goal later in the period. Panarin passed from the top of the right faceoff circle to Kreider, who angled his stick as he turned and flicked the puck past Daws.

The Rangers were outshot 6-1 in the second period before adding an insurance goal 3:55 into the third, when Braun’s shot sailed over the glove of Daws.