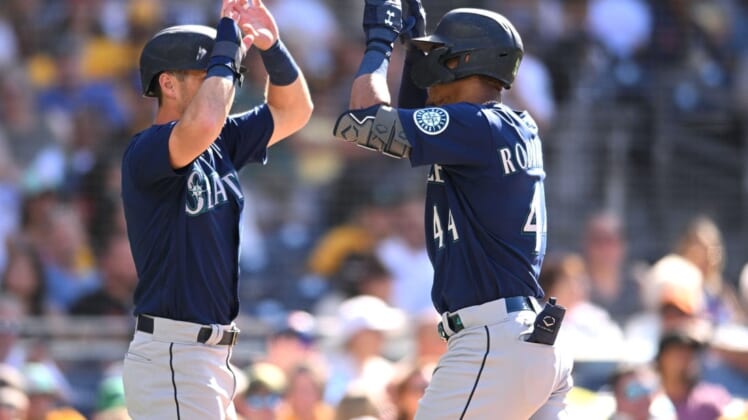 Right-hander Chris Flexen shut out San Diego on four hits over 6 2/3 innings, Cal Raleigh drove in four runs and Rookie of the Year candidate Julio Rodriguez hit a tape-measure, two-run homer Monday afternoon as the visiting Seattle Mariners defeated the Padres 8-2 in the opener of a two-game interleague series.

The win was the Mariners’ sixth in the last seven games. Seattle is 11-3 over the last 14 games. The Padres are 2-7 over their last nine games.

Flexen (5-8) retired the first 10 Padres he faced before issuing a walk to Manny Machado with one out in the fourth. Jake Cronenworth followed with the first of the Padres’ four hits off Flexen, who issued three walks with eight strikeouts.

Meanwhile, the Mariners were scoring four runs off Sean Manaea in 3 1/3 innings in the left-hander’s shortest start of the season. Manaea (3-4) gave up eight hits and four walks with three strikeouts.

The Mariners scored twice in the first on one-out singles by J.P. Crawford and Eugenio Suarez followed by a walk drawn by Carlos Santana. Crawford scored on Raleigh’s ground out and Abraham Toro followed with an RBI double.

Rodriguez’s homer onto the upper balcony of the Western Metal Supply Co. building in left came one out after Dylan Moore’s inning-opening single in the fourth.

Raleigh hit a three-run double off reliever Taylor Scott in the sixth. Rodriguez reached on a throwing error by third baseman Machado to open the inning. Crawford followed with a single and Santana drew a one-out walk to load the bases for the catcher.

Seattle added an unearned run on a throwing error by Padres relief pitcher Tim Hill in the eighth.

Trent Grisham hit a two-run homer in the ninth off left-handed Mariners reliever Tommy Milone for the Padres’ only runs.