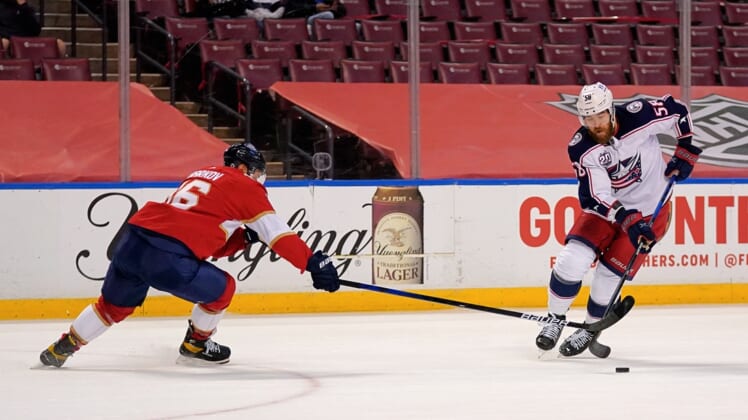 Aleksander Barkov scored the go-ahead goal in the second period, and backup goalie Chris Driedger made 32 saves, leading the host Florida Panthers to a 3-0 win over the Columbus Blue Jackets on Sunday night.

The Panthers, who are No. 1 in the NHL with 56 points, extended their season-high winning streak to six games.

It was Driedger’s second shutout of the season and his first since blanking the Nashville Predators on March 20. At 11-4-2, he also extended his high in wins in a season. He won seven games a season ago.

Barkov, who had the primary assist on Forsling’s tally, has 14 goals this season. This was just Barkov’s second game back from an injury that cost him six contests.

Defenseman MacKenzie Weegar added a pair of assists, adding to his career-high 23 points.

After a scoreless first period, Florida opened the scoring with 1:52 gone in the second.

Columbus was trying to exit its own end, but Weegar prevented that from happening. Patric Hornqvist picked up the loose puck and shoveled it a few feet to his right to Barkov, whose shot from the high slot got past defenseman Vladislav Gavrikov’s block attempt before sailing over Korpisalo’s glove and into the back of the net.

Florida stretched its lead to 2-0 with 12 minutes left in the third as Vatrano came up with a steal before racing in and ripping a wrist shot from the left circle.

The Panthers made it 3-0 with 7:40 remaining as Barkov dished a center pass to the trailing Forsling, who did the rest.