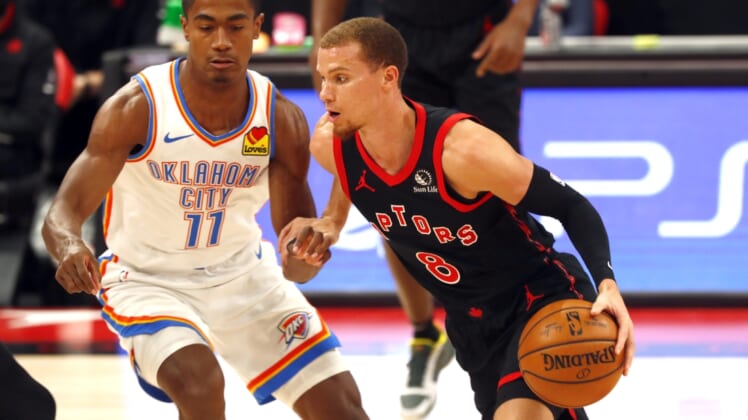 Chris Boucher scored 17 of his 31 points in the first quarter and grabbed 11 rebounds as the Toronto Raptors defeated the visiting Oklahoma City Thunder 112-106 on Sunday night at Tampa.

Boucher scored 10 points in the final three minutes of the game as the Raptors won their third in a row while extending the Thunder’s losing streak to 10. Boucher made a career-high six 3-pointers.

Gary Trent Jr. added 23 points for the Raptors, Malachi Flynn had 15, Stanley Johnson 12 and Yuta Watanabe and Freddie Gillespie each had 10.

Luguentz Dort scored 21 of his 29 points in the first quarter for the Thunder. Darius Bazley added 16 points, Kenrich Williams had 12 and Isaiah Roby 11.

The Raptors, who trailed by as many as 12 points in the second quarter and by seven at halftime, took a one-point lead into the fourth quarter.

The Thunder led 95-91 on Bazley’s 3-pointer with 7:29 remaining. The game was tied at 99 entering the final five minutes. Theo Maledon’s three-point play with 4:08 left gave Oklahoma City the lead. Boucher later made two free throws to tie the game and then hit a 3-pointer to give Toronto a three-point lead with 2:27 to go. Boucher’s layup increased the lead to five with 1:59 left.

The Thunder led 31-28 after one quarter.

The Thunder led 44-32 with 8:46 remaining in the second quarter after Tony Bradley’s layup. The Raptors used a 7-0 run to cut the lead to four points with 2:55 left. Maledon made two free throws with 39.8 seconds remaining to boost the lead to 10, but Boucher completed the first-half scoring with a 3-pointer at the buzzer. Oklahoma City led 59-52.

DeAndre’ Bembry’s jumper with 6:56 to go in the third quarter cut the lead to one. The Raptors led 74-73 on Gillespie’s two free throws with 3:16 left in the third. Toronto led 81-80 after three quarters.