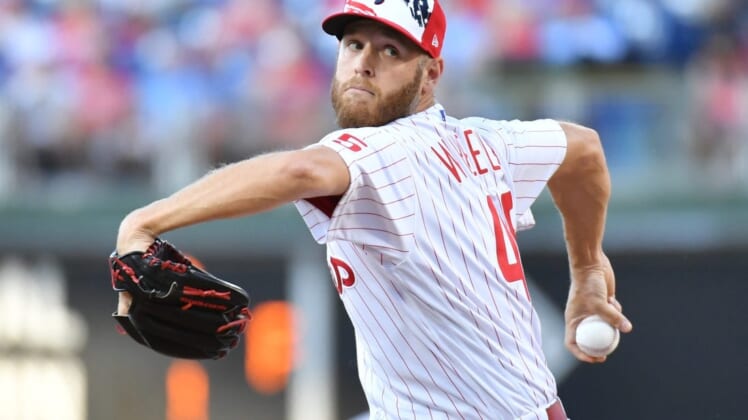 Your moves, Chris Bassitt and Zack Wheeler. The Mets’ and Phillies’ right-handers, respectively, will look to match their predecessors Sunday afternoon in the finale of a three-game set between the National League East rivals.

deGrom got the better — ever so slightly — of Nola in a classic pitcher’s duel Saturday night, when deGrom struck out 10 over six innings and allowed just hits, and a trio of relievers finished up the Mets’ 1-0 win.

Nola took the loss despite allowing just a first-inning run and allowing four hits and one walk with eight strikeouts in an eight-inning complete game. It was the 33rd time the Mets and Phillies have played a 1-0 game and the first since Philadelphia’s victory on April 9, 2016.

“We knew coming in how good their starting pitching has been, their bullpen, and we knew runs were going to be at a premium,” Mets manager Buck Showalter said. “It’s more about trying to figure out how we can score one more run than they do in nine innings.”

The deGrom-Nola battle happened 24 hours after the Mets’ Scherzer and the Phillies’ Suarez each allowed one run over seven innings in Philadelphia’s 2-1 win in 10 innings.

“There’s no margin for error — it’s an intense atmosphere,” said Phillies first baseman Rhys Hoskins, who singled for one of the hits off deGrom and drew a walk against closer Edwin Diaz in the ninth inning. “You know that every play has to be made while you’re on defense, and a run or two has a chance to win the game. So you take that thought process into your at-bats, too, know(ing) that a guy on base means a little bit more because not a lot of guys get on base against those guys.”

Bassitt tied a season-high by tossing eight innings Monday night, when he allowed an unearned run and struck out eight as the Mets beat the Cincinnati Reds, 5-1. Wheeler gave up one run over six innings Tuesday night in the Phillies’ 4-1 victory over the Miami Marlins.

“Zack’s a great pitcher and we’ve got our work cut out for us,” said Mets first baseman Pete Alonso, whose first-inning RBI single accounted for the only run Saturday.

Bassitt is 1-0 with a 1.54 ERA in two career starts against the Phillies. Wheeler, who spent the first seven seasons of his career with the Mets, including two full seasons on the injured list, before signing with the Phillies as a free agent following the 2019 season, is 4-2 with a 2.48 ERA in 10 starts against his former club.