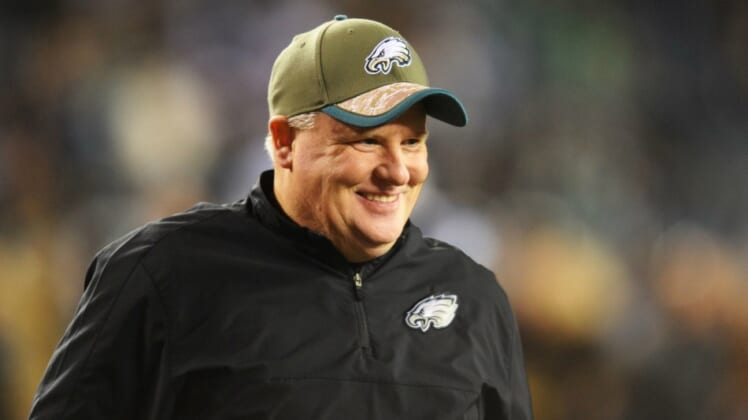 Chip Kelly strongly denied any of his offseason moves were motivated by racism during a session with the press on Thursday.

“I’ve got great respect regarding LeSean, but in this case he’s wrong,” Kelly said, via Mark Eckel of NJ.com. “We weigh a lot of factors when we evaluate players, but color is not one of them.”

Kelly said he did not see it as a problem n the locker room, “just ask the players,” he said.

Eckel also noted Kelly said he called McCoy twice, but that he back never responded.

LeSean McCoy accused his former Philadelphia Eagles coach of being motivated by racism after he was traded to the Buffalo Bills—a notion Kelly was quick to shoot down.

This is what McCoy said back in early May:

All one has to do in order to dispel any notion of Kelly’s alleged racism is look at the free-agent signing of DeMarco Murray. The former Dallas Cowboys star is also African-American, and he is one of the most talented players in the NFL.

Kelly also selected Jordan Matthews, the talented receiver out of Vanderbilt, in last year’s draft. He has shown nothing during his tenure at Oregon or Philadelphia to suggest that anything he does is racially motivated.

Todd Herremans recently quipped that Kelly was “equally racist to all races,” in response to McCoy’s comments.

It seems clear that Kelly is, in no way, shape or form, a racist. McCoy certainly doesn’t see it this way, but the evidence to the contrary is significant.

Perhaps now we can all put this matter to rest for good.