Why Chip Kelly and Colin Kaepernick could be 49ers’ gold rush

Anyone who says — flat-out — that Colin Kaepernick and Chip Kelly have no chance of turning into something special is lying to themselves.

Yes, both coach and player endured embarrassing seasons in which they were rightfully criticized for obvious failures.

Yes, both are seen as flawed by many who study the game.

But any open-minded football theorist knows there is a chance, and not a small one, that the two of them could become one of those rare, joined-at-the-hip combinations that defines the league.

Sean Payton and Drew Brees, Bill Belichick and Tom Brady, Bill Walsh and Joe Montana — these rare acts of football fusion are beautiful to behold. They occur because the player embodies the coach, and the two become as one mind and purpose on the field.

Kelly and Kaepernick have this kind of potential. Anyone who writes off this opinion without giving it at least a small chance of success is being purposefully obtuse.

Both men are extremely driven to succeed and are tireless workers. Both have the ability to change the game immeasurably when at their best.

Yes, Chip Kelly’s 2015 season with the Philadelphia Eagles was extremely disappointing, but it wasn’t an abject disaster.

Many of his personnel moves blew up in his face, and the team suffered through its most miserable campaign in the Kelly era. Still, the Eagles managed to finish 7-9 and were in the race to win the NFC East until the very end of the season.

He didn’t have a quarterback, thanks to an egg-on-face decision to trade for the still-hobbled Sam Bradford. He also blew up his offensive line during the offseason and then watched as the running game eked out 3.9 yards per carry.

And because he never got the running game where it needed to be and didn’t have a quarterback, Kelly’s offense sputtered for much of the season,

But almost all these problems existed because Kelly tried to do too much last year. He failed miserably as a general manager. Nobody can say otherwise. This is why he’s going into the situation in San Francisco without any personnel power. He’s just there to coach.

Are there problems to address? Yes.

Now in San Francisco, the offensive line is still very much a problem that general manager Trent Baalke must address with gusto or we’ll see a repeat of last year’s frustrations.

However, Kelly has a prototypical zone-blocking running back in Carlos Hyde, and nobody should forget about Aussie Jarryd Hayne, along with Mike Davis and at least one more rookie. 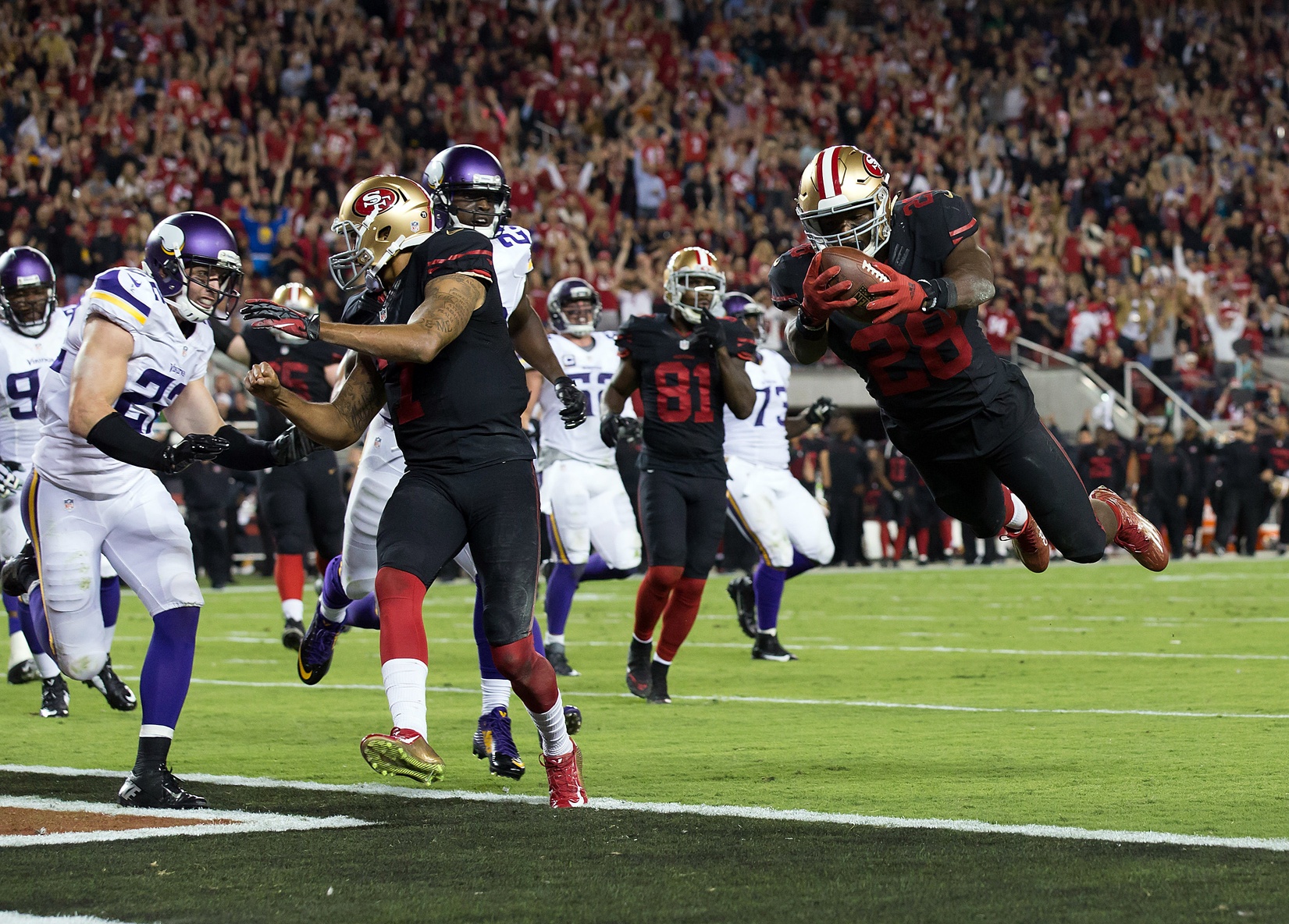 So the pieces are in place to potentially feature a potent rushing attack, especially if Kelly employs Kaepernick as many think he will in a zone-read rushing attack.

Kap unleashed should scare the hell out of opposing defensive coordinators and would create many mismatch opportunities in the passing game on play-action.

Anyone who needs reminding about just how potent Kaepernick is when featured as a runner look no further than this play against the Green Bay Packers:

Kaepernick can drive defenses crazy if featured as a runner. #ChipKelly will use him. https://t.co/GTFxcugrNo

Unfortunately, the 49ers tried to turn Kaepernick into a pure pocket passer and never committed to making him a featured runner in 2014-2015. Sure, there were portions of the game in which he ran some zone-read, but it always seemed like a half-hearted measure.

This isn’t how Kelly will approach it.

Kaepernick can romp. He can score on any given play if he’s featured in the running game on a regular basis.

But here’s the part that scares me: Kaepernick isn’t an accurate short- to mid-range passer.

His short accuracy is particularly concerning.

Kelly’s passing offense is predicated on making quick decisions and delivering the ball on time — both of which have been areas of weakness for Kaepernick in the past.

His struggles when throwing mid-range passes usually manifest because he isn’t adept at anticipating where his guys will find open spaces. Even when he was at his best, Kap made a habit at squeezing the ball into tight spaces.

Can Kap make the throws on time? Of course, and his arm talent rates up there with anyone in the game today.

Most of his issues stem from overthinking and a lack of anticipation. Kelly will try to make up for this by making things really simple at first and by wearing defenses down with a ridiculous pace of play.

Kaepernick can run all day. He won’t tire. If the 49ers can bring in offensive linemen who can run with the quarterback, then this offense has unlimited potential.

His issues as a precise passer aren’t insurmountable. In fact, if Kelly gets Kaepernick’s confidence back, there is no doubt the quarterback can grow into a prodigious passer over time, in this offense.

"I think for Colin Kaepernick's career, it's one of the best things that could have happened." – @MikeMayock https://t.co/Fx0cqSFZJn

Is there a chance the two men just don’t mesh? Absolutely. Kaepernick’s issues with accuracy, timing and reading the field could be a big issue. The 49ers also need to bring in more skill-position guys who can get open and make people miss. There are issues that could stand in the way of success, to be sure.

But the potential for greatness exists.

The raw material needed to become an offensive powerhouse dwells in Santa Clara already, and it’s going to be fascinating to see what develops in the coming months.