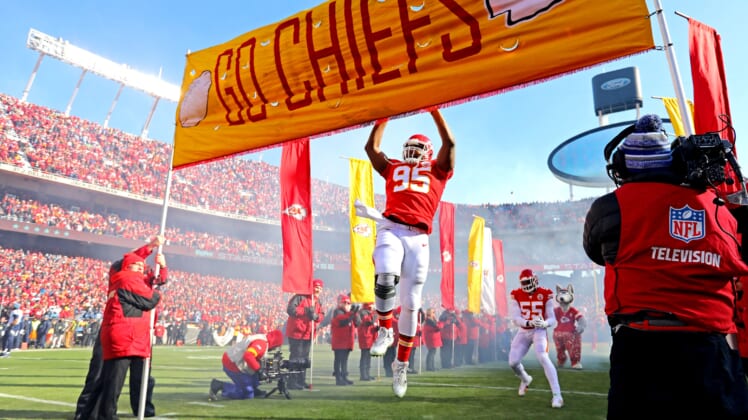 The Kansas City Chiefs will place the franchise tag on defensive lineman Chris Jones, per ESPN’s Adam Schefter, keeping the team’s defensive star under contract for the 2020 season.

While the Chiefs face some difficult decisions this offseason with $18.4 million in cap space, per Spotrac, placing the tag on Jones was an easy decision. Jones recorded 49 quarterback hits, 27 tackles for loss and 24.5 sacks over the past two seasons. He came up huge in Kansas City’s Super Bowl LIV win, delivering in the clutch with constant pressure against the San Francisco 49ers.

The 25-year-old defensive tackle earned his first Pro Bowl spot this past season and received second-team All-Pro honors in 2018.

While the franchise tag keeps him from hitting the open market, his future with the Chiefs isn’t certain. Jones recently hinted that his time in Kansas City could be over and the team’s tight cap situation could push the Chiefs to trade him.

If Jones is shopped in a sign-and-trade, teams like the Miami Dolphins and Indianapolis Colts could emerge as suitors. Given Jones’ talent and age, Kansas City could potentially land a first-round pick or multiple second-round picks for him.

The Chiefs will have some time to try and negotiate a long-term extension with Jones. Due to their limited cap space and an upcoming record-breaking deal with Patrick Mahomes, it wouldn’t be a surprise if they explore trade offers for Jones before the 2020 NFL Draft.