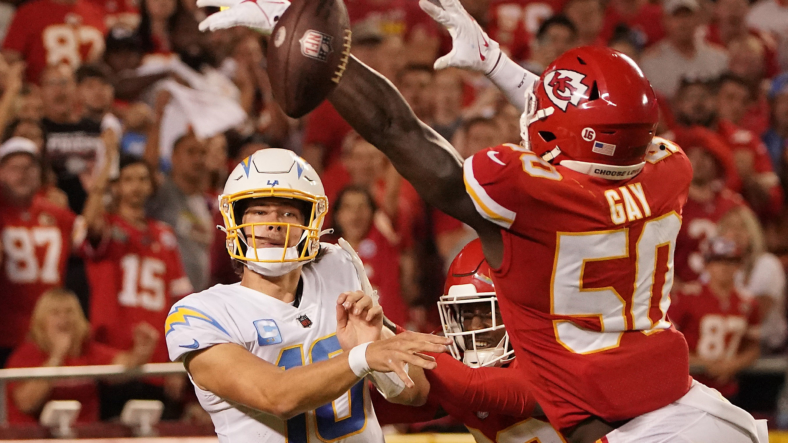 We were just watching linebacker Willie Gay and the Kansas City Chiefs in action on Thursday night when they narrowly defeated the Los Angeles Chargers in primetime. Unfortunately for Gay and his teammates, that will be the last time we see him on an NFL field until Week 7.

On Monday afternoon, the NFL announced Gay will be suspended for Kansas City’s next four games. Gay was found to be in violation of the league’s personal conduct policy, stemming from a January arrest, where he was charged with a misdemeanor criminal destruction of property valued at less than $1,000 during an argument with the mother of his son.

There is no word on whether Gay plans to appeal the NFL’s ruling.

Now Gay will miss games against the Colts, Buccaneers, Raiders, and Bills.

Since joining the Chiefs as the team’s second-round draft pick in 2020, Gay has become a full-time starter at linebacker. The third-year pro has started 21 out of the 30 games he’s played and has racked up 103 tackles, 1.5 sacks, and two interceptions in that span.

While the 24-year-old is not the leader of the linebacking corps, Nick Bolton will feel his absence on gameday. It’s not like the Chiefs had a great defensive unit to begin with, but losing one of their key contributors on defense won’t help defensive coordinator Steve Spagnuolo turn this group around any time soon.

The Chiefs are now expected to turn to third-year pro Darius Harris and third-round rookie Leo Chenal until Gay can return to the lineup in Week 7 against the San Francisco 49ers.