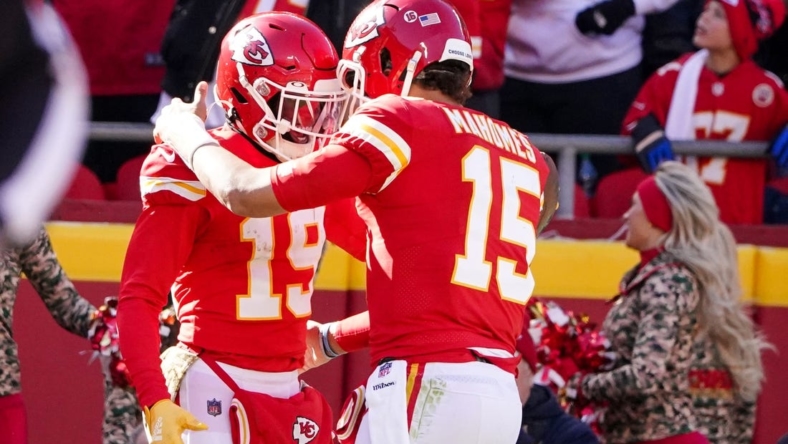 The Kansas City Chiefs are in the driver’s seat to win the AFC West. Their chance to buckle the second-place Los Angeles Chargers into the second row comes in primetime on Sunday night in Inglewood, Calif.

After losing to the Buffalo Bills on Oct. 16, the Chiefs (7-2) have won three straight games. Most recently, Kansas City topped the visiting Jacksonville Jaguars this past weekend behind a signature performance from Patrick Mahomes. The Chiefs quarterback completed 26 of 35 passes for 331 yards and four touchdowns, and he also rushed seven times for 39 yards.

The performance pushed Mahomes into the top 100 among NFL quarterbacks for career passing yards, reaching the milestone in just 72 career games.

But the buzz in Kansas City was all about Mahomes’ new offensive weapon, wideout Kadarius Toney. The Chiefs acquired the second-year player in a trade last month, sending a third- and sixth-round pick to the New York Giants. In just two games with the Chiefs, Toney has 102 yards from scrimmage on eight touches.

He scored on Kansas City’s second possession of the game, via a 6-yard strike from Mahomes.

“He’s a smart kid and he picks it up easy. Always willing to spend time at it, too,” head coach Andy Reid said of Toney. “We’re trying to give him some things that he’s done before, and then adding one or two things the last couple of weeks that he’s not used to doing so that he can continue to grow. (Mahomes) has trust in him because of the feel that he has.”

Toney could be called upon to step up for the Chiefs this week if JuJu Smith-Schuster is unable to play. The wide receiver was knocked out of the Jaguars game in the second quarter after being hit by Jacksonville safety Andre Cisco. Reid confirmed after the game that Smith-Schuster suffered a concussion.

Smith-Schuster did not practice Wednesday, and neither did fellow wideout Marquez Valdes-Scantling, due to an illness. Corner Chris Lammons (concussion) and wideout Mecole Hardman (abdomen) also missed practice, while running back Jerick McKinnon (shoulder, hamstring) was limited.

The Chargers (5-4) are coming off a loss to the San Francisco 49ers and could use a win to boost their hopes of making the playoffs after missing out on the postseason with a Week 18 loss to the Las Vegas Raiders last season.

It was a quiet game for Chargers’ star running back Austin Ekeler, who finished with just 24 rushing yards on six carries. He also had seven catches for 39 yards.

Still, on the season, the Chargers are 0-3 when Ekeler has less than 10 rushing attempts.

“We need more playmaking,” Ekeler said. “We didn’t have that in the second half. We can’t just go out there and play hard. That doesn’t win in the NFL.”

Playmaking has been hindered with the absence of quarterback Justin Herbert’s top wide receivers. Keenan Allen (hamstring) hasn’t played since Week 1 and Mike Williams missed last week’s game. He has 37 catches, tied for tops among Chargers wide receivers, but 30 fewer than Ekeler’s team-leading 67.

The Chargers have battled injuries all season and finished the game against the 49ers with just three healthy defensive linemen. Los Angeles has 11 players on injured reserve. Chargers head coach Brandon Staley said the team will “probably make some acquisitions” this week.

“I think we’re trying to mine the entire NFL and try to find the best fits,” Staley said.