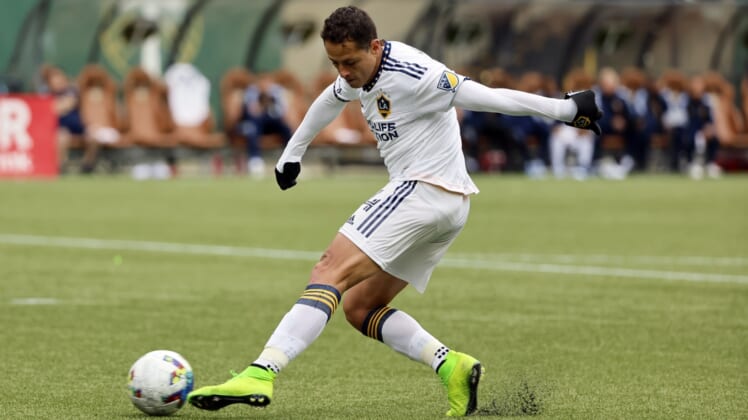 Javier “Chicharito” Hernandez scored twice as the Los Angeles Galaxy defeated the host Portland Timbers 3-1 Sunday afternoon in a match in which both teams finished with 10 men.

Check out the MLS soccer games today run for this weekend

The Galaxy opened the scoring in the ninth minute. Samuel Grandsir made a run down the left wing from near midfield before a give-and-go with Rayan Raveloson at the top edge of the 18-yard box. Grandsir continued until he nearly reached the end line before making a cross to the far post. Chicharito was able to lunge to get the tip of his right shoe on the ball to redirect it into the net.

The Galaxy made it 2-0 in the 16th minute. Grandsir again drove down the left wing, but this time his cross was to the near post and deflected off Tuiloma’s torso and into the net for an own goal.

Playing short-handed, the Timbers pulled within 2-1 as Tuiloma curled a free kick from 25 yards out into the upper right corner of the net in the 51st minute.

Chicharito scored his second in the 59th minute. Raheem Edwards made a run into the penalty area, splitting two defenders at the top left of the box, before crossing the ball for Chicharito, who put a left-footed shot from 12 yards into the far lower corner of the net for his fourth goal of the season.

In the 61st minute, Los Angeles’ Mark Delgado received his second yellow card, leaving both teams with 10 players the rest of the way.

Portland’s Diego Chara was whistled for two fouls, giving him 756 for his career to tie Kyle Beckerman’s MLS record.