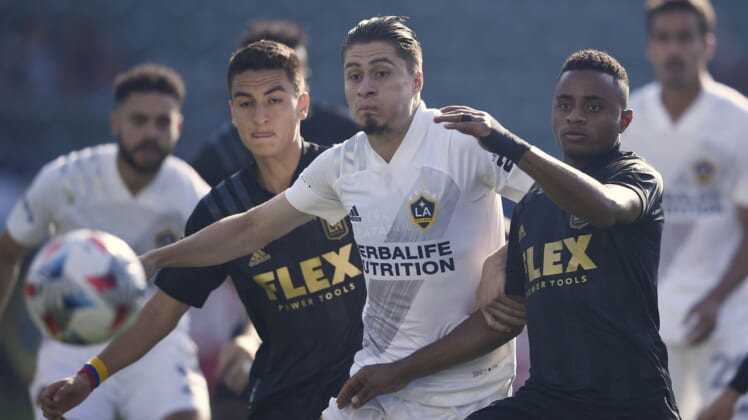 The stars were out in Los Angeles on Saturday as the host Los Angeles Galaxy earned a 2-1 victory over rival Los Angeles FC at Carson, Calif., in a game where the teams’ biggest names delivered.

In the rivalry known as “El Trafico,” the Galaxy received a first-half score from current MLS goals leader Javier “Chicarito” Hernandez and what turned out to be the game winner from Jonathan Dos Santos in the 79th minute.

While LAFC has been the better team in Los Angeles since their inception in 2018, the Galaxy hold a 5-3-3 advantage in the all-time series and have won three of the past four meetings.

In his first El Trafico, after missing all four meetings last season because of injury, Hernandez scored in the 11th minute for his sixth goal in four games.

Hernandez’s goal came after Galaxy defender Derrick Williams made a sliding tackle on the LAFC end and sent the ball forward in one motion to Hernandez, who scored past a diving Sisniega.

After threatening late in the second half, LAFC finally drew even in the 62nd minute when Rossi scored just under the arm of Bond, his first of the season after leading the league with 14 goals in 19 games last season.

Hernandez again was involved in the Galaxy’s late game winner. With his back to the goal from the left edge of the penalty area, he spun and sent a centering pass to a charging Dos Santos, who slotted an easy right-footed shot to the right side of goal.

The goal was Dos Santos’ first of the season and his sixth in five seasons with the club from his play-making midfield position.