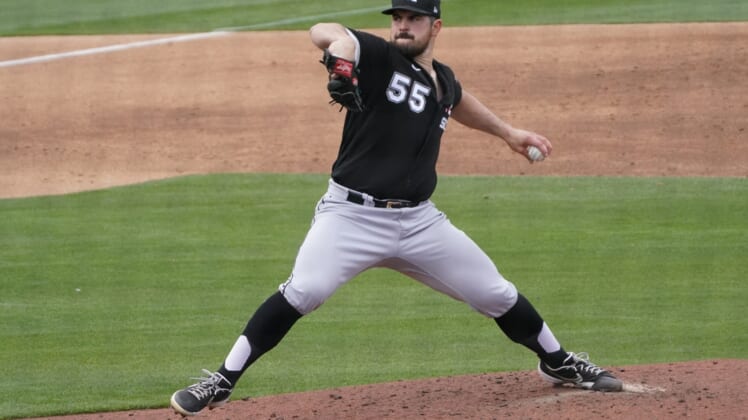 Carlos Rodon was supposed to be the arm that turned around the Chicago White Sox franchise.

It hasn’t exactly worked out that way, but he’s getting a second chance to prove himself with a team that has postseason aspirations.

The left-hander who was the third overall pick in the 2014 draft is scheduled to make his season debut when the White Sox open a three-game series Monday in Seattle.

Rodon, Chicago’s Opening Day starter in 2019, has made just 11 appearances over the past two seasons — in large part because of Tommy John surgery in May 2019 on his left elbow.

He was non-tendered during the offseason before re-signing with the White Sox on Feb. 1 and earning a spot in the rotation by posting a 1.32 ERA in four spring training appearances. In 13 2/3 innings in the Cactus League, he allowed two runs on nine hits with one walk and 16 strikeouts.

“But there were days when I thought, ‘Am I ever going to throw again?’ When you can get on a mound and do what you do again, it’s emotional, right? Because it’s a major surgery and all you know is baseball. You live and breathe baseball. And when the game is taken away from you for a year, it’s hard.”

Rodon said being non-tendered was a “wake-up call.”

The 6-foot-3, 245-pounder changed his eating habits in the offseason and started working out two hours a day.

“Nutrition has a lot to do with your body,” Rodon said. “You’re not going to put cheap gas in a sports car. You’re going to use premium.”

Rodon, who is 2-0 with a 1.89 ERA in three career starts against Seattle, will try to help the White Sox snap a two-game losing streak.

They lost three of four against the host Los Angeles Angels in Anaheim, Calif., to open the season, including a 7-4 defeat Sunday night on Jared Walsh’s three-run homer in the bottom of the ninth.

The Mariners are set to counter with left-hander Justus Sheffield (4-3, 3.58 ERA in 10 starts last season). Sheffield’s lone previous start against the White Sox in 2019 wasn’t a good one, as he allowed six runs on seven hits in 4 1/3 innings with one walk and eight strikeouts.

The Mariners had Sunday off after taking two of three interleague games from visiting San Francisco to open the season.

“Everyone wants to get off on a positive note, and it certainly helped with a come-from-behind win the first night,” Mariners manager Scott Servais said, referring to an 8-7 win in 10 innings on Thursday night.

“That got the ball rolling a little bit. We are young, but this group has been together now and getting to know each other and when to lean on each other. You’re starting to see players mature in front of our eyes,” Servais said.

Seattle’s Mitch Haniger launched a solo home and also doubled in the 4-0 win over the Giants on Saturday.

Having missed the 2020 shortened season and after being limited to 63 games in 2019 for a variety of injuries, ranging from a ruptured testicle to a herniated disc in his back, he’s thankful to be in the game.

“That’s kind of irreplaceable when you’re on the [injured list],” Haniger said to MLB.com. “Some guys go to video games to compete or other things, but it’s nothing really like standing in the batter’s box and playing the outfield in a real big-league game. I’ve been craving that for a while, so it’s been really fun to feel that adrenaline rush again and to get back out there and compete.”