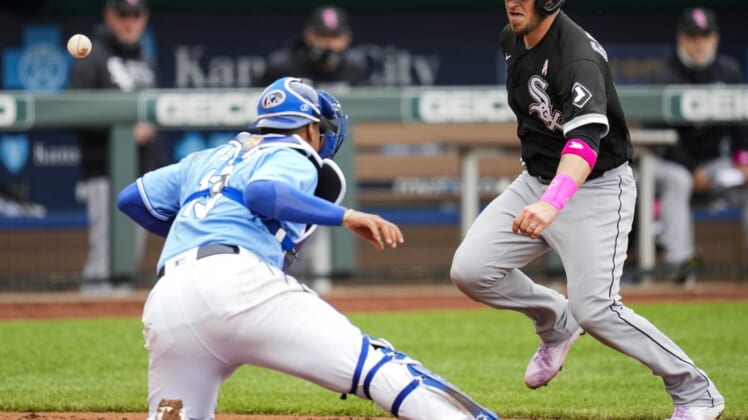 Yermin Mercedes had a double, triple and three RBIs as the Chicago White Sox defeated the Royals 9-3 for a three-game sweep and their 10th consecutive victory at Kansas City.

The Royals lost their eighth consecutive game and completed a seven-game homestand without a victory.

White Sox starter Lucas Giolito (2-3) gave up one run on four hits over five innings with two walks and two strikeouts to pick up the win. The Royals hit Giolito hard, with an exit velocity of 100-mph or better off the righty eight times but getting just one hit in those instances.

Royals starter Mike Minor (2-2) gave up five runs on four hits in five innings to take the loss. He struck out seven and walked two.

The Royals, who broke a 28-inning scoreless streak in the seventh inning Saturday, struck early Sunday. Leadoff hitter Whit Merrifield hit Giolito’s first pitch of the game to the base of the wall in left for a double. He went to third on a single by Andrew Benintendi and scored on a double play grounder by Salvador Perez.

The White Sox took the lead for good with three runs in the top of the second. Minor hit Jose Abreu with a pitch to begin the inning and Abreu scored when Mercedes hit a triple to right-center field.

Mercedes scored on a sacrifice fly by Leury Garcia, and Danny Mendick’s single scored Andrew Vaughn to give the White Sox a 3-1 lead.

In the third inning, Mercedes brought home Yoan Moncada and Yasmani Grandal with a two-out double for a 5-1 advantage.

The White Sox added run in the sixth on a two-out double by Vaughn and an RBI single by Garcia. The Royals loaded the bases with one out in the sixth on three straight walks, but only scored once on a fielder’s choice from Michael A. Taylor to cut the deficit to 6-2.