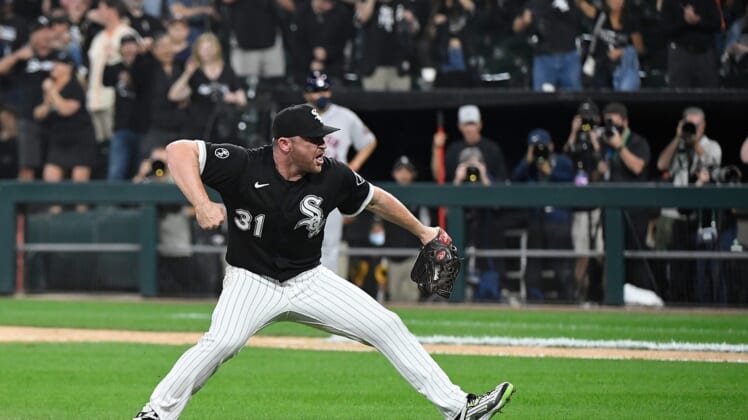 Facing elimination on Sunday, the Chicago White Sox kept their season alive with a resounding victory against the visiting Houston Astros.

Roughly 15 hours after completing a 12-6 rout of Houston, the White Sox will aim to earn another win Monday afternoon in Game 4 of the teams’ AL Division Series.

That result would force a decisive Game 5 Wednesday, the outcome of which already is destined, as White Sox closer Liam Hendriks sees it.

“We came in as an inexperienced team that hadn’t had the playoffs in front of fans before,” said Hendriks, who recorded the final three outs Sunday. “This is obviously a huge one to get that first one out of the way. And then we can run with it a little bit. Now we’ve got the momentum on our side and hopefully we can win out here tomorrow and finish it in five. Sox in five.”

Right-hander Jose Urquidy, 8-3 with a 3.62 ERA in the regular season, gets the call for the Astros, who lead the series two games to one and are looking to advance to the franchise’s fifth straight AL Championship Series.

As with the rest of the Astros’ pitching staff, Urquidy relies on a strong rapport with catcher Martin Maldonado.

“From my standpoint, Martin Maldonado has been invaluable,” Houston pitching coach Brent Strom said. “I think there’s a trust factor, a respect factor for Maldy. He does a lot of prep work, has his notes ready to go, works with our analyst extremely well in going back and forth on pitch selection and what each guy can bring to the table.”

Urquidy has faced the White Sox just once in his career and that was on June 17, when he allowed two runs on four hits in seven innings (2.57 ERA) with five strikeouts to get the victory.

Houston struck out a season-high 16 times Sunday, while the White Sox had a franchise-record 16 hits, including three from Tim Anderson.

Astros manager Dusty Baker said he wasn’t concerned that the White Sox wrestled away momentum, which Baker believes is day-to-day.

“We’ve got to flush this one and come back tomorrow,” Baker said.

Chicago will turn to left-hander Carlos Rodon, who was 13-8 with a 2.37 ERA in 24 regular-season starts but pitched sparingly during the stretch run as he combated arm fatigue and soreness.

Rodon has pitched just eight innings since Sept. 20 while losing velocity from his fastball.

White Sox manager Tony La Russa said the team would take a wait-and-see approach with Rodon, whose most recent outing came Sept. 29 against Cincinnati, when he scattered one hit, two walks and four strikeouts in five scoreless innings.

“Well, if he has his good stuff, then we take an inning,” La Russa said. “You know, take a zero in the first, or two zeros. You know, just watch closely, but the last time he pitched against Cincinnati, that was considerably less than his best. So if he says — he has actually — the ball has been coming out better. He feels better. You know, what that turns out to be, I don’t know, but we’re optimistic and ready to start him.”

Said Rodon: “The last few days, it seemed like I’ve turned a corner. Ball is coming out good. I feel good. I feel ready.”

Rodon has started seven career games against the Astros and is 2-0 with a 1.55 ERA after winning one of his two starts against Houston this season.