Robert Beric scored the tiebreaking goal in the 72nd minute, and the Chicago Fire topped visiting Orlando City 3-1 on Wednesday night to record back-to-back victories for the first time this season.

Boris Sekulic leveled the contest late in the first half and Chinonso Offor added some stoppage-time insurance for the Fire (3-7-2, 11 points).

Beric, who came close to finishing a bevy of chances, was finally rewarded with just under 20 minutes to play. Taking a well-timed pass from Alvaro Medran, who logged his second assist of the night, Beric split a pair of Orlando defenders and beat frozen goalkeeper Brandon Austin to break the 1-1 tie with his second goal of 2021.

Offor iced the game with a sprinting score in the fifth minute of extra time on a counter off an Orlando attack. 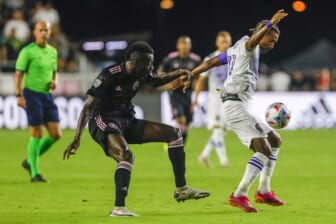 Andres Perea gave Orlando (6-3-3, 21 points) the lead just past the half-hour mark, but the Lions were unable to hold the advantage and dropped back-to-back contests for the first time this season. Orlando City, which lost 2-1 to New York Red Bulls on Saturday, had a glorious chance to level the match in the 86th minute, but Junior Urso’s point-blank bicycle kick was stopped by Fire keeper Bobby Shuttleworth.

Chicago had the best chance of the first 10 minutes when Przemyslaw Frankowski, who assisted on Offor’s score, hit the crossbar.

Orlando eventually found its collective footing, stepped up the attack and eventually was rewarded through Perea, who was perfectly positioned to drill home a 34th-minute redirection inside the box after a skewed clearance attempt by Chicago defender Jonathan Bornstein.

The Fire pulled even in the waning seconds of the first half. Sekulic’s stellar header off a brilliant extended cross from Medran in the first minute of stoppage time left the visitors frustrated heading into the break.