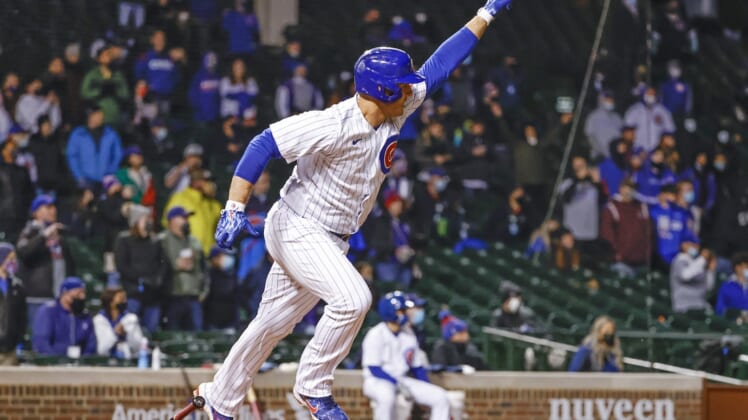 Anthony Rizzo hit a walk-off single in the bottom of the 11th inning to lift the Chicago Cubs to a 6-5 win over the visiting Los Angeles Dodgers on Wednesday night.

Rizzo’s RBI single to shallow left field gave the Cubs a three-game sweep over the Dodgers. Jake Marisnick added a two-run homer for the Cubs, and Matt Duffy finished 3-for-4 with a double and an RBI and scored three runs.

Max Muncy went 2-for-4 with a double, a homer and two RBIs to lead the Dodgers. Gavin Lux finished 2-for-5 with a double and an RBI.

Cubs right-hander Alec Mills (2-0) earned the victory in relief. He gave up two runs, both unearned, on three hits in two innings. He walked two and struck out one.

Dodgers left-hander Garrett Cleavinger (0-3) took the loss, giving up two runs (one earned) on two hits in two-thirds of an inning. He walked one and struck out two.

The score was tied at 3 after nine innings.

Muncy ripped an RBI double in the top of the 10th to give the Dodgers a 4-3 lead. His hit drove in Lux, but Justin Turner was thrown out at home plate as he tried to tack on another run.

The Cubs answered with a run in the bottom of the 10th to even the score at 4. Joc Pederson hit a towering fly ball to right field, but the wind kept it in the ballpark and led to a sacrifice fly rather than a game-winning three-run homer.

Matt Beaty gave the Dodgers a 5-4 lead in the top of the 11th on a fielder’s choice groundout.

Duffy’s RBI single tied the score at 5 in the bottom of the frame, and he came around to score the winning run on Rizzo’s single.

The game was scoreless until the top of the fourth, when Muncy hit a solo homer to put the Dodgers on top. His shot to left-center field was his fifth homer of the season.

One inning later, the Dodgers increased their lead to 2-0. Chris Taylor hit a leadoff single and scored on a double by Lux.

The Cubs evened the score at 2 in the bottom of the fifth. Marisnick belted the first pitch he saw to straightaway center for a two-run homer, his fourth.

Los Angeles regained a 3-2 advantage in the top of the sixth. The Dodgers loaded the bases with nobody out, and Will Smith came through with a sacrifice fly to center.

The Cubs pulled even on a fielder’s choice groundout by Javier Baez in the eighth.