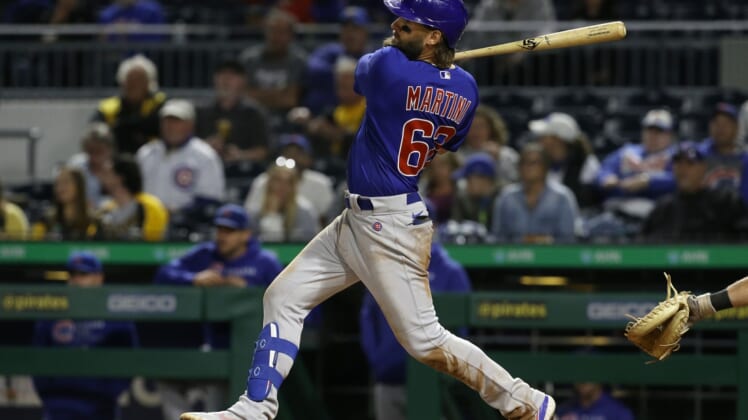 Sergio Alcantara homered and drove in three runs to back Justin Steele’s seven scoreless innings Thursday as the visiting Chicago Cubs sent the Pittsburgh Pirates to their 100th loss of the season, 9-0.

Steele (4-4), a rookie who reached a career high in innings, allowed four hits, walked one and struck out seven. The left-hander combined with relievers Rex Brothers and Jason Adam, who pitched an inning each, on a six-hit shutout.

Pittsburgh starter Miguel Yajure (0-2) got rocked for seven runs and seven hits in two innings, with two walks and one strikeout.

Bote left in the seventh inning when he apparently got injured while swinging in the on-deck circle.

Ortega set the tone when he sent the game’s first pitch out to right for his 11th homer and a 1-0 Chicago lead.

In the second, Bote reached on a fielder’s choice in front of Alcantara’s fifth homer, to right, to put the Cubs in front 3-0. It was Alcantara’s first hit of the series in which Chicago won the last two games.

Steele followed with a single to center, went to third on Ortega’s single to right and scored on Frank Schwindel’s groundout to make it 4-0.

Ortega stole third, and Ian Happ walked. Happ was badly caught in a steal attempt but ended up safe at second as Ortega beat a throw home to score. Contreras knocked in Happ with a double to right. Duffy’s base hit to left-center brought in Contreras and upped the margin to 7-0. The single extended Duffy’s hitting streak to 10 games.

Against reliever Tanner Anderson in the fifth, Contreras led off with a single to right. An out later, Nick Martini singled to center, and Bote followed with an RBI single to left. Alcantara singled up the middle to increase Chicago’s lead to 9-0.