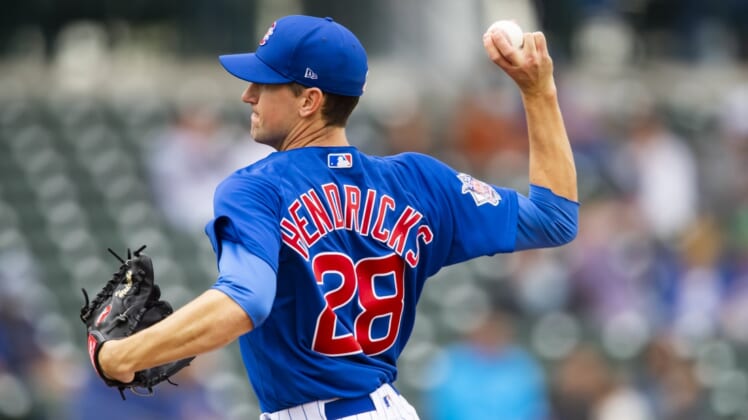 Several key mainstays of the Chicago Cubs could be making their final Opening Day appearance for the team in Thursday’s matchup with the visiting Pittsburgh Pirates.

Anthony Rizzo, Kris Bryant and Javier Baez are each beginning their free-agent walk years and would like nothing more than to revisit the joy of five years ago, when the trio helped the franchise claim its first World Series title since 1908.

While Chicago is expected to battle Milwaukee and St. Louis for the top spot in the National League Central, Pittsburgh faces an uphill battle in the competitive division. The Pirates finished last year’s shortened campaign with the majors’ worst record at 19-41 and are clearly in rebuilding mode after losing Josh Bell, Joe Musgrove, Chris Archer and Jameson Taillon during the offseason.

One reason for optimism for Pittsburgh is third baseman Ke’Bryan Hayes, a top NL Rookie of the Year candidate. The 24-year-old hit .376 with five homers and 11 RBIs in 24 games last season and continued to impress with a .429 average in 16 spring training games.

“If you watch him on a day-to-day basis, you’d be shocked that this guy’s played 24 games in the big leagues,” Pirates manager Derek Shelton said.

Pittsburgh’s unproven rotation is led by 28-year-old Chad Kuhl, who is set to make his first career Opening Day start. The Delaware native is 2-6 with a 5.82 ERA in 12 career games (11 starts) against Chicago and has struggled to contain Rizzo, who is 8-for-24 with two homers against the right-hander.

Kyle Hendricks is making his second consecutive Opening Day start for the Cubs after posting a 2.88 ERA with 64 strikeouts and eight walks in 81 1/3 innings over 12 starts last season. The 31-year-old is hoping to duplicate his success from last season’s opener, when he recorded a three-hit shutout against Milwaukee on July 24.

After playing in front of cardboard cutouts last season, both teams are eager to welcome fans back on Opening Day. Wrigley Field will a limited-capacity crowd, which Chicago mayor Lori Lightfoot announced last week would be expanded from 20 to 25 percent, which would mean about 10,000 fans in the park … plus, of course, fans on the rooftops.

“It’s going to be awesome,” said Hendricks, who is 6-8 with a 3.02 ERA in 19 career starts against the Pirates. “To have the fans back in there, it’s been such a big hit not having them. So, we really realize why we play the game, and to be able to have them and that energy they bring every single day, it’s going to be so much fun.”

Chicago had a relatively quiet spring training but made news last week when manager David Ross named David Bote as the team’s starting second baseman ahead of Nico Hoerner, who was optioned to Triple-A.

Hoerner remains a prominent part of the Cubs’ plans, but Ross says he is excited to see what the Bote can do as an everyday starter. Bote, who turns 28 next week, earned the job after hitting .311 with three home runs and eight RBIs in 19 spring-training games.

The Pirates are similarly eager to learn more about starting center fielder Anthony Alford, who arrived in a trade from Toronto late last season. The 26-year-old hit .265 with two home runs in 13 games this spring and appears fully recovered from last September’s right elbow surgery.