The Chicago Cubs first signaled they would be sellers in 2021 with the Yu Darvish trade, a financially-driven transaction. With the team now sinking in the MLB standings, Chicago is expected to make even bigger trades this summer.

As the July 30 trade deadline draws closer, MLB rumors are swirling about Chicago’s plans. A hot start once led many to believe this team could contend, but Chicago is now fading away in the NL Central.

Now, the core of Kris Bryant, Javier Baez and Anthony Rizzo could only be together for a few more weeks based on the latest report from ESPN’s Buster Olney.

“By the time we get to the deadline, the heroes of that 2016 team will likely be traded. Anthony Rizzo, Kris Bryant, Javier Baez. This is going to be a mass sell-off by the Cubs as they begin to turnover this team. Look, the Cubs are a buffet table for any contending team and that’s why other clubs are calling them.”

With the MLB Playoffs likely an unrealistic goal, tearing down the core of this team is viewed as the only logical decision. Bryant, Rizzo and Baez are all headed for free agency this winter. All three stars will reject a qualifying offer and Chicago would be fortunate just to re-sign one of them.

Instead of receiving three compensatory picks in the 2022 MLB Draft, one for each player, the Cubs are fielding trade offers right now. 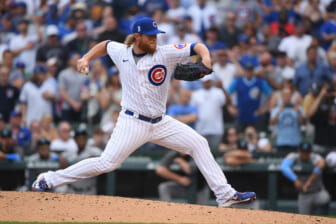 Unfortunately, the timing isn’t ideal. Chicago would have been much better off trading any of the trio this past winter, when the acquiring team would receive a full year of production. But the sluggers’ struggles and the team’s need to draw fans to Wrigley Field forced them to hold.

Baez is a talented, but very flawed player. A wizard with the glove at shortstop, teams would love to add his defense and a bat with 21 home runs and a .493 SLG. But he also strikes out in 36.6 percent of his plate appearances and owns a .284 OBP.

The Cubs already traded Joc Pederson and others will be moved. Relievers Ryan Tepera and Andrew Chafin are likely trade candidates. There’s not a better closer on the market than Craig Kimbrel. If there’s anything a contender needs, the Chicago Cubs are willing to move it this summer.