Chicago Cubs, Cincinnati Reds to meet in ‘Field of Dreams’ game in 2022

If you build it, they will come … and then come back again.

On the heels of the overwhelming popularity of Major League Baseball’s “Field of Dreams” game last week, the league will hold another regular-season game at the site of the iconic baseball movie in Dyersville, Iowa, in the 2022 season — pitting the Chicago Cubs and Cincinnati Reds.

According to multiple reports Monday, the National League Central rivals will face each other in another made-for-television event on Aug. 11, 2022, at the specially constructed field — which seats just 8,000 fans — located just yards from the actual field used in the movie set from the 1989 hit film. 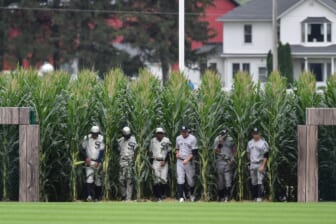 Last Thursday, the first “Field of Dreams” game more than lived up to its billing as the Chicago White Sox used a Tim Anderson walk-off home run to rally past the New York Yankees 9-8. The Yankees had scored four runs in the top of the ninth to take an 8-7 lead.

The game was the most-watched MLB regular-season game since 2005, with Fox Sports announcing that the game averaged 5.9 million viewers and peaked at over 6 million viewers from 8:45 to 9 p.m. EDT.

The Reds were World Series champions in 1919 over the White Sox, who had eight members of the team banned from baseball for life over allegations they threw the series in the infamous Black Sox scandal. One of those punished was “Shoeless” Joe Jackson, played by Ray Liotta and featured heavily as a main character throughout the movie.