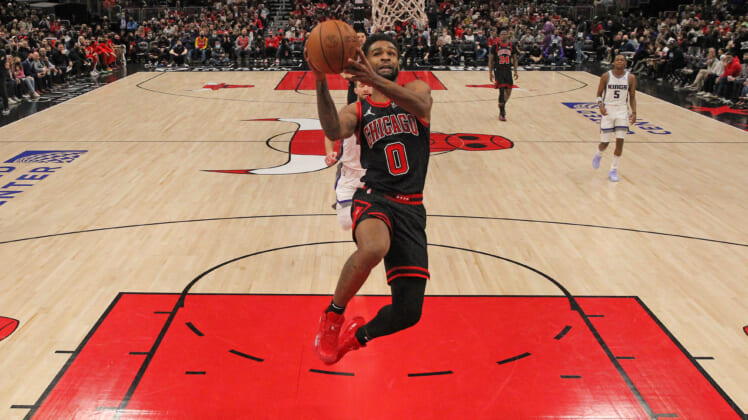 Heading into the offseason, many expected the Chicago Bulls to weigh a Coby White trade. It’s not that White has been bad since becoming the seventh pick in the 2019 NBA Draft, it’s more about him already being replaced as the team’s starting point guard.

When he was drafted, there obviously was hope he’d develop into a star, but that hasn’t happened, or at least not as quickly as the Bulls would have liked. So they made other plans, and were able to land Lonzo Ball in trade last offseason. And with Zach LaVine entrenched as the starting two-guard, where does White fit on the Bulls? Continuing to come off the bench? Even Ayo Dosunmu flashed last season, and he figures to receive more playing time in 2022.

So, again, what is White’s future with the team as he heads into the final year of his rookie contract? While the team can extend a qualifying offer next offseason to make him a restricted free agent, they’d be better off getting more value from him now, giving another team the chance to secure White long-term.

Yet, as Darnell Mayberry tells it, the Bulls reportedly “rejected significant interest” from teams looking to pursue a trade for White this offseason. Is that real? Why would the Bulls do this? Couldn’t they build a better roster by shipping White out for a valuable piece? There may be one big reason why the team simply isn’t comfortable parting with another point guard just yet.

Last season when Lonzo Ball went down with a knee injury, it was initially only believed to keep him out for six weeks, giving the Bulls a chance to be nearly full-strength entering the playoff stretch. Only that’s not what happened. Instead Ball didn’t play another game all season, after starting 35 contests early on.

This had a big impact on the Bulls’ ability to compete on a nightly basis. Ball was shooting a career-high 42.3% from distance, while also averaging new personal bests in steals in blocks as the Bulls looked like a force out of the East.

Unfortunately, Ball’s injury set them down another path that impacted their playoff seeding, and word surrounding his injured knee wasn’t good.

Expected to be a short-term recovery, the Bulls had to shut Ball down for the rest of the season. Toward the end of the season, reports began to emerge of the Bulls’ concerns with Ball’s knee, thanks to a lack of improvement.

But a June 24 report suggests Ball’s back to making progress as his left knee recovers. Still, until the Bulls know for sure, until they see him back on their floor, getting rid of White is a risky move. It’s not that hard to understand why they wouldn’t want to trade one of their young players, but that doesn’t mean a trade couldn’t happen later this summer.