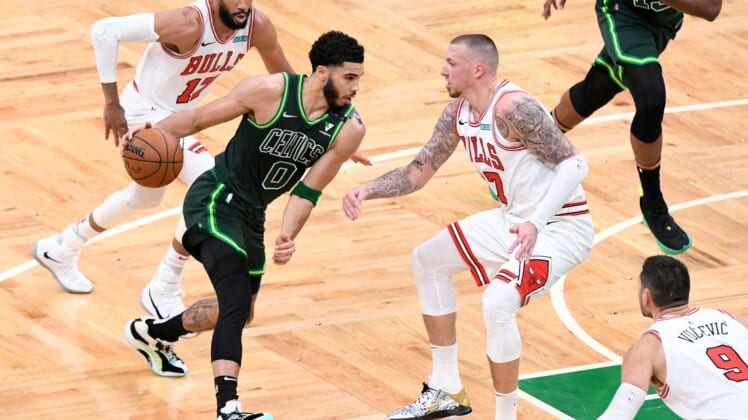 Vucevic added nine rebounds as the Bulls won their second straight since a five-game losing streak. Coby White scored 19 and Thaddeus Young and Garrett Temple 13 apiece as Chicago remained without top scorer Zach LaVine for a third straight game due to health and safety protocol.

Jayson Tatum had 14 points, 13 rebounds and 10 assists in his first career triple-double for the Celtics, whose six-game winning streak came to an end. Jaylen Brown led with 23 points as Boston played without Marcus Smart and Kemba Walker due to non-COVID illness.

Down eight to begin the fourth quarter, the Celtics cut their deficit to one, 85-84, on a pair of free throws from Tatum with 6:04 to go. The Bulls got a 3-pointer from Temple and bucket from Vucevic, but Payton Pritchard and Brown drained threes to knot the score at 90.

Chicago ripped off a quick 6-0 run and led 96-92 entering the final minute. Boston got within 96-94 on a Tremont Waters break through the paint with 16.5 seconds left, but the Bulls made their free throws to hold on.

After trailing the entire first half, the Bulls tied the game at 64 on a White three with 3:52 remaining in the third. That kicked off a 13-2 run that had Chicago up 74-66 at period’s end.

The Celtics opened the game on a 9-0 run and finished the first quarter up 30-24.

The offensive pace slowed considerably to begin the second, both teams going scoreless over a 2:14 stretch early. The Celtics grabbed their first double-digit edge, 40-30, on a Tatum layup and led 45-34 at 3:25 before another cold stretch that ended on a Pritchard three with 18.9 seconds left.

Bulls big man Daniel Theis finished with six points in his first game against his former team since being traded last month.