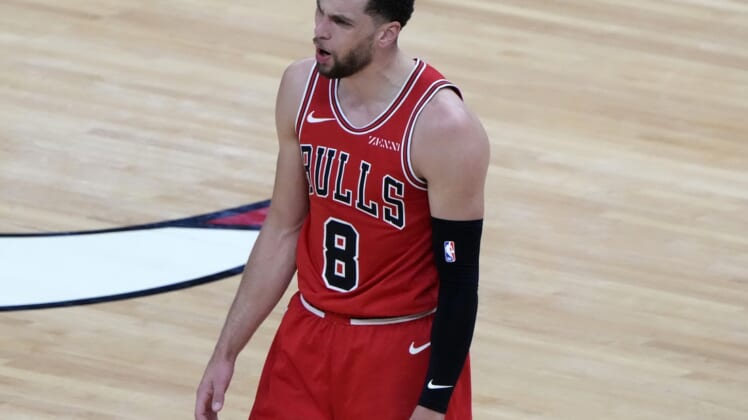 Nikola Vucevic scored 29 points, shot 5 of 7 from behind the 3-point line and grabbed 14 rebounds, and the Chicago Bulls led the Charlotte Hornets wire-to-wire in a 120-99 win Thursday in Charlotte.

Charlotte (32-34) cut the deficit to three points in the late second quarter, but a Lauri Markkanen 3-pointer before halftime gave Chicago a six-point foundation that it grew over a 37-21 third quarter.

Chicago’s lead swelled to as many as 24 points in the second half. The Hornets threatened to rally on a few occasions in the fourth quarter, but they could never cut the deficit to fewer than 16 points.

Behind the interior presence of Vucevic, the Bulls outscored the Hornets 50-36 in the paint. Chicago also parlayed 15 offensive rebounds, part of a 56-45 advantage overall on the glass, into 19 second-chance points.

Seven Bulls scored in double-figures, including Garrett Temple with 12 and Markkanen with 10 off the bench.

Zach LaVine, who came into Thursday’s contest seventh in the NBA at 27.5 points per game, finished with 13 points.

Washington scored a team-high 24 points and shot 6 of 8 from beyond the 3-point arc. Terry Rozier was the only other Charlotte starter to score in double-figures with 12 points, while LaMelo Ball struggled through a 1 of 10 shooting night to finish with four points.

Reserves Malik Monk and Cody Zeller came off the bench to score 20 and 11 points.