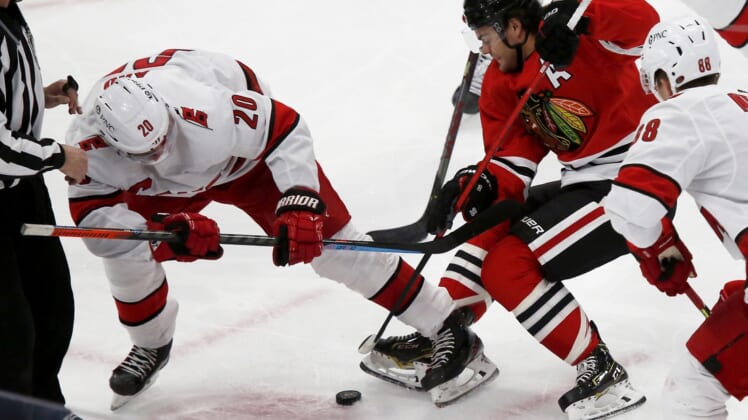 Dylan Strome and Alex DeBrincat scored 3:33 apart in the second period and Kevin Lankinen made 31 saves as the host Chicago Blackhawks edged the Carolina Hurricanes 2-1 on Tuesday night to earn their third win in five games.

Carolina outshot Chicago 32-16 but was unable to capitalize as its three-game winning streak ended. The Hurricanes went 10-2-2 in March.

Outhustled for much of the first period, the Blackhawks responded with a pair of goals in the first 4:02 of the second. Playing in his first game since the birth of his daughter, Weslie, Strome showed patience during a 2-on-1, keeping the puck and firing a wrist shot from the right face-off circle past Hurricanes goaltender Alex Nedeljkovic just 29 seconds into the period.

The Blackhawks struck on the power play 3:33 later, as Patrick Kane stole the puck from Brett Pesce just outside the right circle and found DeBrincat waiting across the slot.

The goal was the 19th for DeBrincat in 33 games this season, surpassing his total in 70 games during the 2019-20 campaign. DeBrincat has seven points in the past seven games.

Andrei Svechnikov answered for the Hurricanes at 15:41 of the second, as he deflected a Brady Skjei shot past Lankinen.

Carolina frustrated Chicago with its speed from the outset, generating 11 scoring chances in the first period compared to three for the Blackhawks while outshooting Chicago 13-5. The Hurricanes killed off a tripping penalty against Dougie Hamilton late in the period.

Hurricanes center Vincent Trocheck returned to the lineup after missing the past eight games with an upper-body injury. He assisted on the Svechnikov goal to extend his points streak to seven.

Hamilton was held scoreless as his point streak ended at 14 games. It was the longest such streak in the NHL this season.

Lankinen has limited opponents to two goals or fewer 13 times this season.