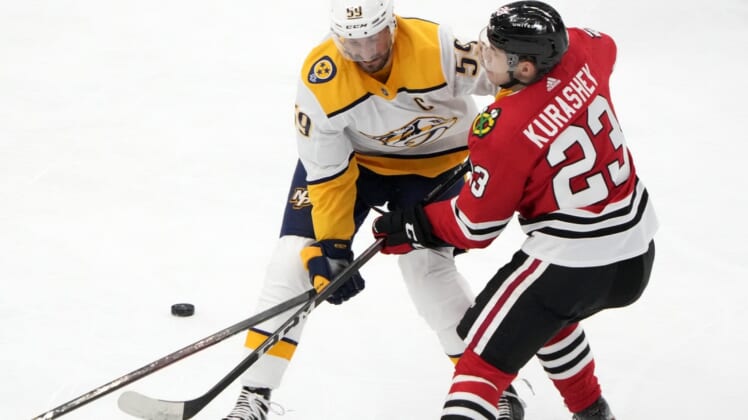 Hagel took a pass from Vinnie Hinostroza in three-on-three play and lifted a high shot over goalie Juuse Saros for his second overtime winner this season for Chicago (22-20-5), which beat Nashville (25-21-2) for the first time in seven tries (1-4-2).

The situation looked dire after Nashville’s Luke Kunin made it 4-1 early in the third period, but rookie Wyatt Kalynuk and Hinostroza scored 69 seconds apart to put the match at 4-3.

Less than two minutes later, Dominik Kubalik tied it at 4 with his 15th tally, and the first of the two-game set eventually went to overtime to set up Hagel’s heroics.

Pius Suter posted a goal and an assist, and Hagel also notched two assists. Goalie Malcolm Subban was outstanding in stopping 36 of 40 shots in just his second start this month.

Nashville’s Mikael Granlund posted a goal and an assist, and Colton Sissons and Eeli Tolvanen found the net. Ryan Johansen handed out an assist in his 700th NHL game.

Back in goal after a 30-save win Tuesday over Chicago, Saros made 25 saves for the Predators, who lost for just the fifth time in their last 17 games (12-4-1).

In the first period, Hagel quickly turned after a Hinostroza steal, led a two-on-one and dished a pass to rookie Suter, who popped in his 13th goal at 4:14.

Back in the lineup after missing seven games, rookie Tolvanen tied it at 1 by jamming home a pass from Viktor Arvidsson for his 11th goal at 14:16.

In the second after a long shift in the Chicago defensive end and the Blackhawks unable to get a line change, Matt Benning flipped a high, short pass that Sissons clipped with a high stick.

However, Chicago defenseman Connor Murphy touched the puck as it bounced into the Predators’ offensive zone — negating any high-stick stoppage of play — and Sissons possessed it, raced in and gave Nashville its first lead at 13:39.

In the frame’s final seconds, Granlund buried a dagger — using a curl-and-drag move to get inside of Murphy in the left circle for his 12th marker with 1.4 seconds remaining for a 3-1 lead.