Chicago Blackhawks out to avoid repeat performance vs. Carolina Hurricanes 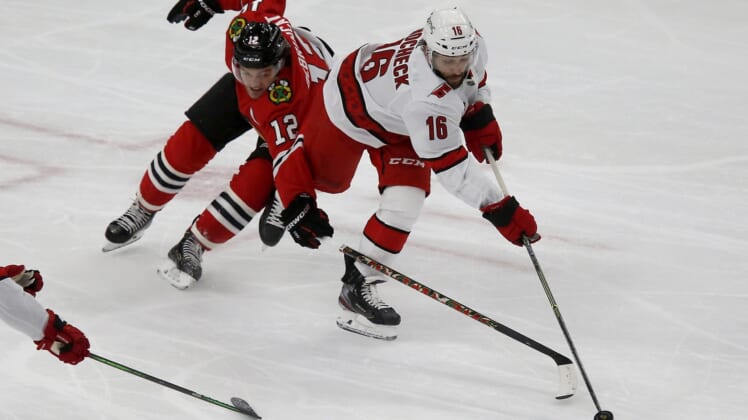 The Chicago Blackhawks probably can’t afford a repeat performance when they host the Carolina Hurricanes again on Thursday night.

The Blackhawks escaped with a 2-1 win against the Hurricanes on Tuesday in the opener of the two-game set, even though they were outnumbered 32-16 in shots on goal and 41-23 in the face-off circle.

“We’re probably going to have to play better to win again against these guys next time,” said Chicago’s Dylan Strome, who scored the first goal of the game Tuesday after missing the previous game for the birth of his child.

The victory didn’t keep the Blackhawks from dropping into fifth place in the Central Division, tied in points with the fourth-place Nashville Predators, who have won six in a row.

While the Blackhawks are battling for a playoff spot with 19 games left, the Hurricanes are safely among the top three in the Central Division.

Carolina sits in third, one point behind the Florida Panthers and Tampa Bay Lightning.

“We need the points,” Chicago coach Jeremy Colliton said. “They’re in a different position than us. Maybe they can worry about style points, but we’re just trying to get a win.”

Though the Hurricanes sit comfortably in the playoff picture, they’d like to avoid hitting a speed bump similar to the one they ran into earlier this month, when they dropped three in a row against the Detroit Red Wings and Columbus Blue Jackets, two teams well out of the running in the Central.

Carolina coach Rod Brind’Amour was clearly unhappy with how the game unfolded on Tuesday.

“Very, very frustrating,” he said. “It’s one thing to make them earn it, but we said, ‘Here you go.’ It’s not like we played a poor game. We just had a couple of hiccups there that cost us.”

The Hurricanes welcomed back Vincent Trocheck on Tuesday. He had 24 points in 24 games before going down with an upper-body injury on March 9 and missing eight games.

He assisted on his team’s lone goal, giving him at least a point in his past seven games (four goals, five assists).

Martin Necas did not tally a point for the Hurricanes on Tuesday but totaled four goals and three assists in the previous three games to earn Second Star of the Week in the NHL.

Dougie Hamilton also will look to start a new points streak for Carolina after his run ended at 14 games on Tuesday, the longest by a defenseman since Shayne Gostisbehere had a 15-game streak for the Philadelphia Flyers during the 2015-16 season.

Patrick Kane extended his points streak to five games for the Blackhawks on Tuesday despite not registering a shot on goal.

He assisted on Alex DeBrincat’s second-period power-play goal, which gave Chicago a 2-0 lead and proved to be the game-winner.

Kane has seven points (one goal, six assists) during the points streak, and he’s been very productive against Carolina this season as well, compiling nine points (three goals, six assists) in four games.

DeBrincat has 19 goals in 33 games this season, eclipsing the 18 goals he had in 70 games last season.