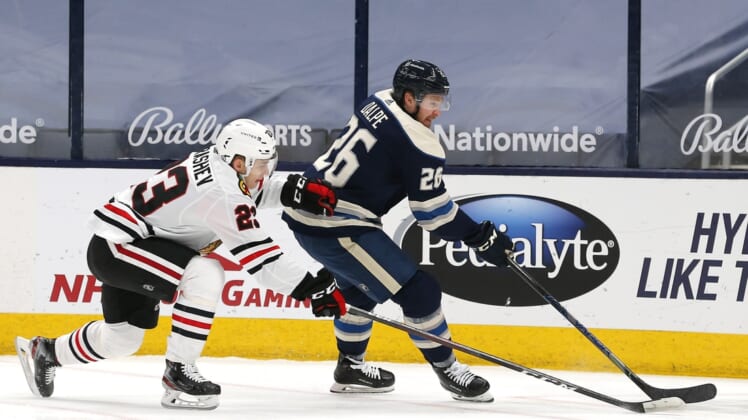 Brandon Hagel scored 1:25 into overtime, and the visiting Chicago Blackhawks beat the Columbus Blue Jackets for a fifth straight time, 4-3 on Monday night.

Amid a three-on-two situation, Hagel took a pass from Kirby Dach and drilled the puck past Columbus netminder Joonas Korpisalo for the winner. It was the Blackhawks’ second victory in three nights at Columbus, and moved them within two points of Nashville for the fourth and final playoff spot in the Central Division.

Chicago is 6-2-0 this season against Columbus, which has lost three straight amid a 2-8-2 rut.

Off a 200-foot rush of his own, Patrik Laine tied the game at 3-3 on his second goal of the contest with 8:28 in regulation. Laine’s scored half of his 12 goals this season against Chicago, and the latest came after the Blackhawks erased a 2-1 deficit earlier in the third period.

Following a neutral-zone turnover by the Blue Jackets, Patrick Kane (40 assists in 2020-21) corralled the puck and found rookie Philipp Kurashev, whose drive made its way past Korpisalo (30 saves) for a 2-2 tie at the 6:15 mark of the third. A little over two minutes later, and after another Columbus turnover, this time in its own zone, Brett Connolly — in his first game since being acquired from Florida in a five-player trade on April 8 — picked up the puck and beat Korpisalo to give Chicago a 3-2 lead.

Columbus opened the scoring with 5:59 left in the first period when Stefan Matteau got behind the Chicago defense and went top-shelf off a breakaway for his first goal of the season. However, Chicago leveled the score via Duncan Keith’s slapshot on the power play with 3:35 left in the opening frame.

The Blue Jackets regained the lead 6:11 into the second on Laine’s drive from just inside the blue line.

Kevin Lankinen made 30 saves for the Blackhawks.