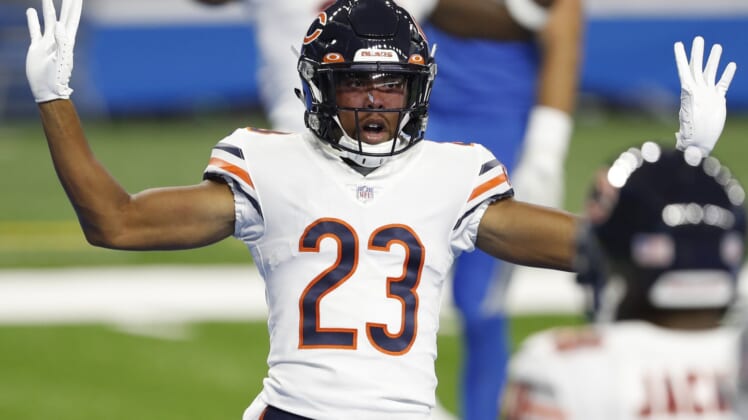 The Chicago Bears aren’t having the greatest offseason, and it may reportedly get worse if they can’t find a way to keep Kyle Fuller around.

According to the latest buzz out of the Windy City, Fuller may find himself cut loose soon.

Brad Biggs of the Chicago Tribune reported Wednesday that he’s hearing the Bears could let Kyle Fuller go by the end of the day:

While Chicago would save $11 million in salary cap space by releasing Fuller, it’d also mean a $9 million dead cap hit, and no compensation in exchange for a relatively good player who’s a former first-round pick and two-time Pro Bowler.

General manager Ryan Pace has to be in absolute panic mode right now. The timing of this Fuller news suggests he may well have been part of the reported offer Pace made to the Seattle Seahawks in trying to acquire star quarterback Russell Wilson.

Two unnamed starters were part of the reported package Pace floated to Seattle, along with three first-round picks and a third-round choice. Given the fact that Fuller is entering a contract year, and the Seahawks needed a cornerback after losing Shaquill Griffin in free agency, it’d have made sense that he was involved.

But that’s more speculation and connecting dots than anything else. Now that Andy Dalton appears to be Pace’s QB of choice entering 2021, it’s time for Chicago to plan accordingly and rework its unsavory salary cap situation to keep a decent core of players intact.

Fuller is most likely to walk in free agency next offseason given the fact that the Bears can’t seem to get over the hump, or field a competent quarterback to push them deep into the playoffs. Now that this rumor has leaked about Fuller, Pace would struggle even more to get much for the 29-year-old in a trade if he wanted to make a deal.

Given the thin cornerback depth Chicago already has after releasing Buster Skrine, Pace should at least try to feature Fuller in some sort of trade. Otherwise, it’s unclear how the Bears plan to assemble a competent platoon at one of the most important positions in the modern NFL.

Facing Green Bay’s Aaron Rodgers and Minnesota’s Kirk Cousins in the NFC North without Kyle Fuller or a viable replacement or two in his stead is a recipe for disaster, even with Khalil Mack and a dynamic from seven still in the fold.