On Thursday, the Chicago Bears and Churchill Downs Incorporated announced a Purchase and Sale Agreement (PSA) for the Arlington Park land parcel located in Arlington Heights. Exactly what this means yet is unclear.

The Bears certainly could plan to use the Arlington Park location as a future place to play instead of the legendary Soldier Field, yet that’s not official.

They could just as well be using the Arlington Heights PSA to negotiate a better agreement with Soldier Field.

Here are the quotes distributed by the Bears this morning via their official team website.

“We are excited to have executed a Purchase and Sale Agreement (PSA) for the Arlington Park property,” said Bears President and CEO Ted Phillips. “We are grateful to Churchill Downs Incorporated for their efforts to reach this point. We also appreciate the support of Mayor Tom Hayes and the Village of Arlington Heights. Finalizing the PSA was the critical next step in continuing our exploration of the property and its potential. Much work remains to be completed, including working closely with the Village of Arlington Heights and surrounding communities, before we can close on this transaction. Our goal is to chart a path forward that allows our team to thrive on the field, Chicagoland to prosper from this endeavor, and the Bears organization to be ensured a strong future. We will never stop working toward delivering Bears fans the very best experience.”

Not only did Bears President and CEO Ted Phillips comment on the agreement, but Chicago also included quotes from the Churchill Downs Incorporated CEO to magnify the idea of the Bears playing football in Arlington Heights as a real possibility, even indicating there were multiple bidders.

“This has been an extraordinarily competitive bid process,” said Churchill Downs Incorporated CEO Bill Carstanjen. “Congratulations to the Chicago Bears for their professionalism and perseverance. It is clear they are committed to an exciting vision for their team and their fans. We wish them the greatest success and are excited for the opportunity this brings to the Village of Arlington Heights and the future economic development of this unique property.”

The press release didn’t stop there. Even the Arlington Heights Mayor got involved, sharing his excitement for the continued development of his community.

“I could not be more excited about the news that the Chicago Bears have signed a Purchase and Sale Agreement to buy the Arlington Park property in our community,” said Arlington Heights Mayor Tom Hayes. “My goal for any redevelopment has always been to put this prime piece of real estate to its highest and best use, and I can’t think of a higher and better use than this one. There is a long way to go as we begin this journey, and many issues for the community to discuss, but the Village is committed to working with the Bears organization and all stakeholders to explore this opportunity for Arlington Heights and the northwest suburban region.”

As far as those nostalgic to the millions of memories at Soldier Field over the 40 years of Chicago Bears football being played there, it’s not time to panic. 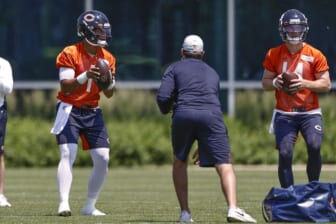 However, the Bears are taking steps to potentially someday play elsewhere. Maybe even in a brand-new state-of-the-art facility located in Arlington Heights.