Cheerio! Raiders Off to London in 2018 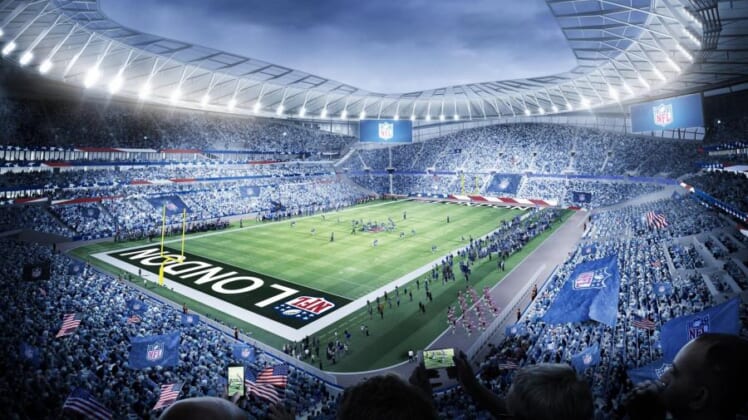 The NFL and the Oakland Raiders today released the overseas schedule and the Silver and Black will take on the Seattle Seahawks in London next season.

Showing again the strength of the Oakland Raiders brand, the team is slated to play internationally again in 2018 – this time in London against the Seattle Seahawks during Week 6 of the season.

The brand new Tottenham Stadium in London will host the Raiders vs. Seahawks on October 14.

The October 14, 2018 matchup will mark the first-ever NFL game played at Tottenham Stadium, the brand new home of the English Premier League club Tottenham Hotspurs. Overall, the NFL will stage three games in London next season. In addition to the Raiders/Seahawks, the Philadelphia Eagles will meet the Jacksonville Jaquars at Wembley Stadium on Week 7 or 8, followed or preceded by the Tennessee Titans vs. Los Angeles Chargers on Week 7 or 8.

“The Raiders are a truly global brand and we look forward to hosting the first NFL game in Tottenham Hotspur’s new stadium.” – Raiders Owner Mark Davis.

“We continue to be very excited by the growth of the NFL in the UK,” said NFL Commissioner Roger Goodell. “The fans have demonstrated outstanding support and passion for the NFL over the past 11 seasons and we look forward to some great games in London this year. A key feature of our success is playing in iconic, world-renowned venues like Wembley and Twickenham, and we look forward to playing in what will be another incredible setting for NFL football at Tottenham’s new stadium.”

If you’re interested in flying “over the pond” to check out the Raiders in the UK, ticket information will be available starting January 18th at www.ticketmaster.com/nfl.