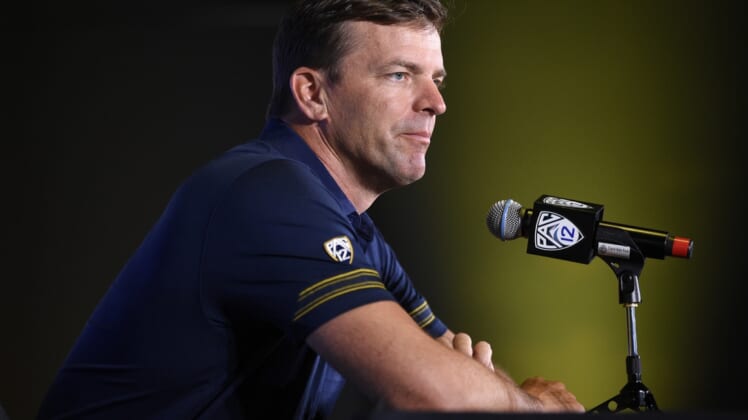 Chase Garbers passed for two scores and ran for another on Saturday afternoon, guiding California to its first football win of the season with a 42-30 victory over Sacramento State in a nonconference game at Berkeley, Calif.

Damien Moore rushed for two touchdowns, Jeremiah Hunter and Trevon Clark hauled in scoring passes, and Nikko Remigio returned the opening kickoff of the second half 99 yards for the Golden Bears (1-2), who had opened the season with losses to Nevada and Texas Christian.

Jake Dunniway threw for 370 yards and two touchdowns and his backup, Asher O’Hara, ran for a pair of scores for the Hornets (1-2), an FCS team that lost its second straight.

Cal never trailed in the game, with Moore scoring twice from 4 yards out in the first quarter and Garber hitting Hunter for 45 yards in the second period to account for a 21-6 halftime advantage.

Sacramento State didn’t go down without a fight, twice rallying within two scores in the third quarter on O’Hara’s second rushing touchdown, a 2-yarder, and a 34-yard pass from Dunniway to Marshel Martin.

Ahead just 35-20 after three quarters, Cal finally gave its home fans a comfort zone when Garbers ran 16 yards for the Golden Bears’ final touchdown with 12:50 to go.

Garbers went 22-of-34 passing for 288 yards with one interception, and also rushed four times for 68 yards.

Moore was Cal’s leading rusher with 87 yards on 12 carries, while Hunter was the top receiver with five catches for 78 yards.

Dunniway completed 25 of 43 passes with one interception, with eight of his completions and one of his scoring passes going to Pierre Williams, who totaled 121 receiving yards. O’Hara led Sacramento State rushers with 49 yards on 12 runs.