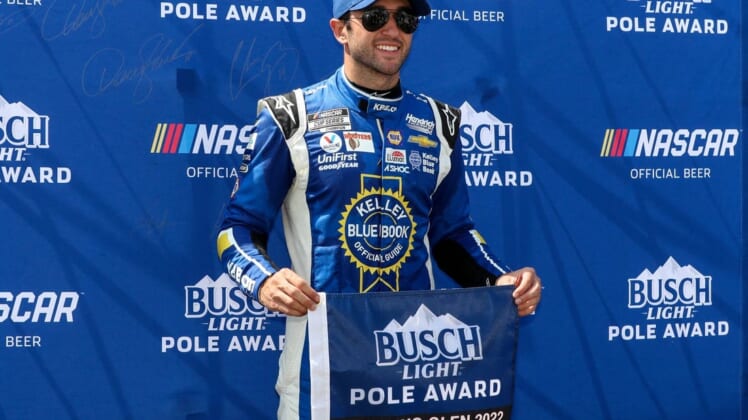 Elliott turned a lap of 125.147 mph around the 3.377-mile road course in the No. 9 Hendrick Motorsports Chevrolet besting his teammate, reigning series champion Kyle Larson by a slight .015-seconds to claim his third pole position of the season and the 12th of this career.

It is a fitting front row for the race start with Elliott and Larson combining for five road course wins just last year. Elliott is a two-time Watkins Glen winner – earning his career first trophy there in 2018 with seven road course victories. Larson is the defending race winner.

“I feel like there’s still work to do there from where we were in practice,” the 26-year-old Elliott said. “Feel like there’s a couple parts of the track I want to put together better. Just really hard to hit all of it. It’s just so fast. The pace is just so high in this car here.

“I feel like from what I remember with so much throttle you’re carrying, a little bit really goes a long way.”

Also of note, Christopher Bell had engine issues during practice and was unable to make a qualifying run so he will start 38th in the 39-car field.

This weekend marks the highly-anticipated NASCAR Cup Series debut for the former Formula One driver Raikkonen, who will be driving the No. 91 Project 91 Chevrolet for Trackhouse Racing.

The 41-year old former world champion was careful to be modest and realistic in his expectations for the race, considering he has had only limited track time in a NASCAR Cup Series car. He was allotted a practice session last week at Virginia International Raceway — not in a Trackhouse car — and of course, had a single practice session and qualifying at Watkins Glen on Saturday.

The Finnish driver, who has two previous career NASCAR starts — in the Camping World Truck Series and Xfinity Series in 2011 — was a respectable 13th fastest in the Group B qualifying session and will start the No. 91 Chevy from 27th position.

“Obviously, I wish I had more laps, I’m not sure what line to take and trying to put laps together,” Raikkonen said after qualifying, “But it was fun.”

“We’ve just to make sure we know the rules and not making any silly mistakes on that side,” he added. “We’ll see what we can do with the car and move up from where we started.”

It was typical of the measured approach the 2007 F1 World Champion.

“It’s a new experience,” Raikkonen said in a trackside press conference prior to qualifying on Saturday. “I don’t know how it’s going to go but I think it’s just a nice challenge. We’ve had limited running of the car and we’ll have a very short practice here, so that will be tricky. It’ll be quite a challenge but it’s also exciting.

“We’ll see where we stack up. There are very fast guys here that have been doing this for years, so it will be very hard. But we’ll see what we can do.”

Asked why he is making this stock car start on another continent after such an illustrious open-wheel career, Raikkonen smiled a little at the implication it could somehow tarnish his great career if he didn’t do well.

“I don’t see any risk. … why not [try something new],” Raikkonen said. “What do I have to lose? If I do bad in a NASCAR race or bad in any race, I don’t care because I do it for myself. A good or bad end result, it could happen even if I did 20 races. They all could be bad for many different reasons.

“I don’t see any negative. I think it’s great what Justin (Marks) and the team is doing giving a chance for all of us from Europe. … NASCAR is more known there, but I’m sure there are a lot of driers that would like to have a chance to try it. It’s not very easy, so maybe it will open some doors in the future for more chances to try and get more Europeans into the sport.”

While Raikkonen was careful not to create any unrealistic expectations, his team owner Justin Marks was optimistic.

Marks also revealed this will be the only start for the team’s Project91 third car in 2022 but he plans on at least six races for the car in 2023 – primarily on road courses and possibly in the Daytona 500 and other “tent-pole” races like it.

As popular Team Penske driver Ryan Blaney continues to vie for the final NASCAR Cup Series Playoff position, he already scored a major victory – resigning with the iconic Penske team this week. He has been with the team for 10 years – spanning starts in the Xfinity Series and ultimately his entry into NASCAR’s premier league.

“It has been a really cool 10 years and I am looking forward to continue that on for a long time,” said Blaney, who will start the No. 12 Team Penske Ford 26th on Sunday. “It’s great to get that out there, obviously the silly season side of it, it is nice to not be in those talks and have a home because they have been like family to me and I look forward to carrying on with them.”

Blaney has seven NASCAR Cup Series victories with Penske – including three last year. A victory this weekend at Watkins Glen, however, would be hugely significant – snapping an uncharacteristic winless 2022 and securing a Playoff position with only one regular season race remaining beyond Watkins Glen.

He has two top-10 finishes in five Watkins Glen starts with a best showing of fifth place in 2019. Blaney is the defending summer race winner at Daytona International Speedway, site of the regular season finale next week. He also has a pair of runner-up finishes in the DAYTONA 500.

There have been 15 different race winners in 2022 and Blaney goes into Sunday’s race with a 26-point advantage over Joe Gibbs Racing driver Martin Truex Jr. fighting for that last Playoff points position. A win for either would ensure that driver qualifies for the top-16 Playoff grid. Interestingly they will start alongside each other on Sunday from the 13th row.

“Honestly, it is the same mindset as the second or third race of the year,” Blaney said of closing out the regular season. “It is just the time of year as to why it gets talked about more, obviously. You always want to win races and do well in stages and beat everybody else.

“There is really no way to approach it any differently. You just try to do the best you can and maximize your day.”

“I have slept great this week, no different than any other time,” Blaney added. “You can’t stress yourself out about it. It is either going to happen or it isn’t, whether you make the Playoffs or not. There are only two choices, two options. You can’t stress about the negatives if you don’t make it.

“If you stress yourself out about that then your mind is set on that you aren’t going to t make it. You just have to have an open mind about anything can happen and you just have to do your best.

This week former NASCAR Cup Series champion Kurt Busch issued a statement saying he would miss an additional two races – this week at Watkins Glen and next week at Daytona Beach – as he continues to heal from a concussion suffered during a qualifying crash at Pocono (Pa.) Raceway four weeks ago.

“As much as I want to be back in the car, the time is still not right,” Busch said in a statement issued on social media this week. “Over the last few weeks, I have focused all my efforts on getting better. And in order to fully focus my recovery on trying to be back for the Playoffs, I will not be competing in the next two races at Watkins Glen and Daytona

“The decision was not an easy one, but the right one.”

Current NASCAR Xfinity Series standout Ty Gibbs will continue to drive Busch’s No. 45 23XI Racing Toyota for those two events. The 19-year old Gibbs has one top-10 (10th at Michigan) in four races for the team while Busch is sidelined. He qualified the car 16th for Sunday’s race.

Larson’s No. 5 Hendrick Motorsports Chevrolet has been fast all weekend, but it failed pre-race inspection twice resulting in the loss of a pit selection and the ejection of car chief Jesse Saunders. Larson is the defending race winner, was fastest in Saturday’s opening practice and qualified second – .015-second off his pole-winning teammate Elliott.

The defending NASCAR Cup Series champion and one-race winner in 2022 is hopeful his qualifying effort is a sign of good things to come on Sunday. He’s had only two top-10 finishes in the last five races entering Watkins Glen.

Xfinity Series regulars Riley Herbst, Sam Mayer, Austin Hill, Daniel Hemric and Justin Allgaier complete the top 10 on the starting grid. Gibbs is the only former winner in the race.