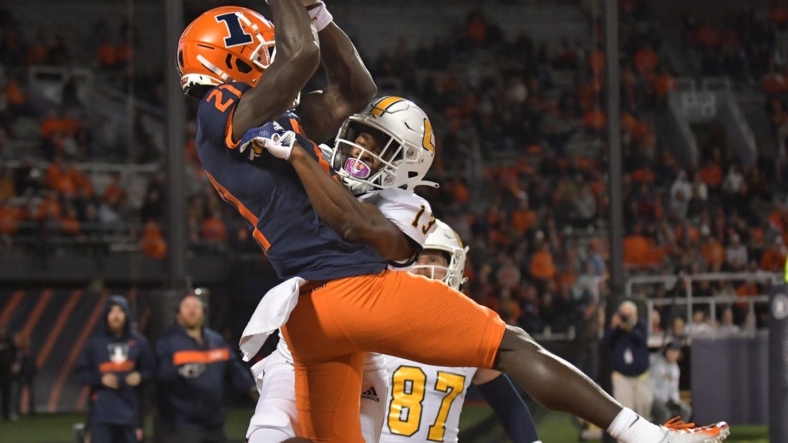 Both teams are 3-1, but it was the Fighting Illini coming out on top and doing so as easily as could be imagined. The Mocs entered the game ranked ninth in the Football Championship Subdivision, but they couldn’t make a first down until the 1:14 mark of the first quarter.

By then, Illinois already led 10-0 — on Brown’s 9-yard touchdown run just 2:45 into the game and Caleb Griffin’s 34-yard field goal with 2:39 left. It never got any better for Chattanooga, which couldn’t generate push to create a running game or muster any kind of passing attack.

Mocs quarterback Preston Hutchinson, who had earned consecutive Southern Conference Player of the Week awards, hit just 6 of 18 passes for 49 yards with a pair of interceptions before departing the game early in the fourth quarter.

Chattanooga’s one shot to put pressure on Illinois ended when Hutchinson forced a pass into the end zone that Jartavius Martin intercepted for a touchback. The Mocs ended the night with only 142 total yards and seven first downs.

Meanwhile, DeVito piloted an attack with all kinds of balance. Not only did Brown clear 100 yards again, Pat Bryant caught six passes for 112 yards and Isaiah Williams grabbed nine for 103. It marked the first time in program history that the team had a 100-yard rusher and two 100-yard receivers in the same game.

DeVito made it 24-0 with two second-quarter scoring strikes, less than 3 1/2 minutes apart. He found Michael Marchese wide open for a 25-yard touchdown, then zipped a 17-yard pass to Bryant with 5:52 left before halftime.

The Illini capped the scoring in the third quarter when Williams took a short pass and zoomed 63 yards down the right sideline.

DeVito, who completed 23 of 31 passes, didn’t play in the fourth quarter.