Chase Brown, No. 21 Illinois look to run over Purdue 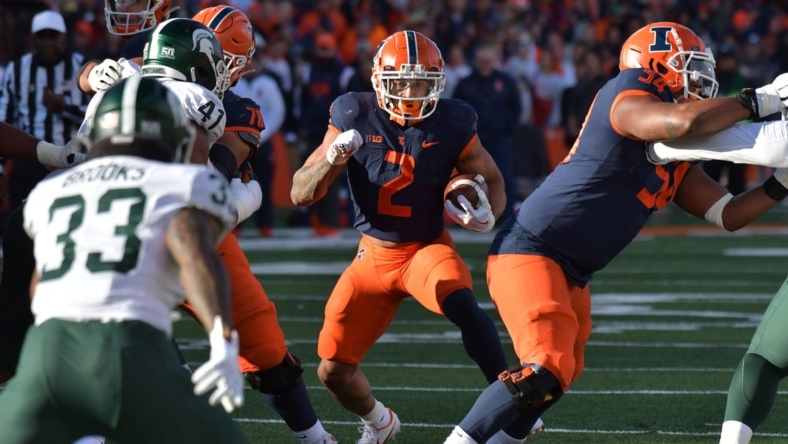 Things are heating up in the Big Ten West.

No. 21 Illinois sits in first place — just one game above four teams that are tied for second — and will have to fend off one of those contenders on Saturday when it takes on Purdue in Champaign, Ill.

Tommy DeVito completed 25 of 37 passes for 288 yards and a pair of scoring strikes to Isaiah Williams, and Chase Brown rushed for 136 yards, but Illinois couldn’t overcome 23 unanswered points from the Spartans.

Now the Illini are in danger of losing back-to-back games for the first time this season.

“Lot of things to play for this week,” Illinois coach Bret Bielema said. “Obviously a Big Ten West opponent. A team with obviously all the things that I know you guys are well aware of within the Big Ten race to get to (Indianapolis, title game on Dec. 3).

“Kind of what we’ve done all year is tried to focus on the moment. We’ve had success doing that seven times and failure doing it twice, so hopefully we’ll be a little bit more in line with those seven opportunities that we came away with the victory.”

Illinois will have to rediscover that winning formula against a Boilermakers program that has dominated the series for the better half of the past two decades.

However, the Boilermakers find themselves on a two-game skid after their offense failed to get in a rhythm against a stout Iowa defense last weekend in a 24-3 defeat.

Mitchell Fineran’s 34-yard field goal late in the second quarter provided Purdue’s only points, while Aidan O’Connell threw for just 168 yards on 20-for-43 passing while getting intercepted twice.

The Boilermakers also were hampered by their inability to stop the run, as they let Hawkeyes halfback Kaleb Johnson amass 200 yards on the ground.

Things won’t get any easier for the front seven on Saturday against Brown, who has topped 100 rushing yards in a program-record 10 consecutive games. He leads the nation with 1,344 yards and took just seven games to eclipse the 1,000-yard mark, which tied the fastest pace in program history (J.C. Caroline, 1953).

“He’s done an outstanding job,” Purdue coach Jeff Brohm said of Brown. “He’s one of the best in the country. Their offensive line is big and physical. They’ve done a good job running the football. He’s tough, he’s been tough, he’s physical, he’s got good hands.

“We’re going to have to figure out a way to keep him in check or it could be a long day.”

With a win on Saturday, the Illini would level the all-time series. The Boilermakers hold a 46-45-6 record against Illinois dating to 1890.