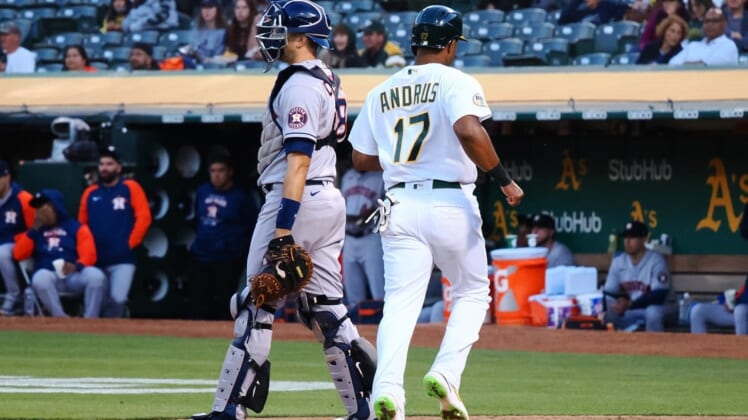 Chas McCormick had three hits, including the tie-breaking home run in the eighth inning, as the visiting Houston Astros did just enough to beat the hapless Oakland Athletics 3-1 on Tuesday in the middle game of an American League West series.

Houston has won the first two games in this series and five of seven overall. On Tuesday, the Astros got five shutout innings from the bullpen.

Rafael Montero (3-0), the fourth Astros pitcher, got the win with a perfect eighth inning and Ryan Pressley earned his ninth save, getting a double-play grounder in his second straight appearance to end the game.

Frankie Montas (2-5) took the loss despite a second consecutive strong outing. He allowed two runs on seven hits, with five strikeouts and no walks. Oakland dropped its fifth game in the past six.

Houston was 11-10 and tied for second place with Seattle when the month started; it ended the month 32-18 and five games ahead of the Los Angeles Angels in the AL West standings.

The Athletics got the scoring started in the fourth as Cristian Pache singled with two outs, off Houston starter Cristian Javier, to bring home Elvis Andrus.

The Astros answered in the fifth, with Yordan Alvarez beating out an infield hit, moving to second on a single by Jeremy Pena and scoring on McCormick’s single.

McCormick broke the tie and chased Montas with a solo home run to lead off the eighth. Zach Jackson relieved and walked four straight batters; the fourth, to Alex Bregman, sent home Jose Siri with a huge insurance run for the Astros.

Tony Kemp and Ramon Laureano had two hits each to lead the Athletics, who lost 20 games in August and have fallen to the bottom of the AL West standings. Oakland has won an MLB-worst seven games at home this season.