Charlotte out for revenge vs. injury-plagued Atlanta United 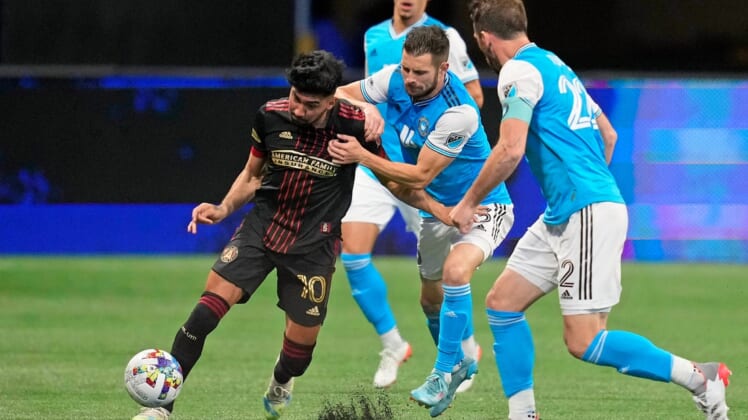 Unhappy with how the teams’ first meeting ended, members of Charlotte FC look for a more favorable conclusion in a Sunday afternoon rematch against visiting Atlanta United.

“Our mindset is that this is a revenge game,” defender Jaylin Lindsey said. “It was something to learn from. We learned a lot from that Atlanta game.”

Atlanta (3-1-1, 10 points) has specialized in late-game goals, posting three of them so far this season.

“We never stop,” said midfielder Jake Mulraney, who scored the decisive goal against Charlotte. “That shows our character and it also shows our quality and our fitness as well to keep going.”

Atlanta United recorded their first shutout of the season by winning 1-0 last weekend at D.C. United.

Charlotte (2-4-0, 6 points), a first-year team, endured the second shutout in franchise history with last week’s 2-0 setback to the Philadelphia Union.

Despite the strong start to the season, injuries are becoming a topic with Atlanta.

The United lost striker Josef Martinez to knee surgery, midfielder Osvaldo Alonso to a torn ACL and midfielder Matheus Rossetto to a hamstring ailment that could keep him out for up to a month.

Striker Ronaldo Cisneros was added on loan from Chivas.

The United will also be without backup goalkeeper Dylan Castanheira, who sustained a ruptured Achilles tendon during training Wednesday.

Lindsey has played every minute of Charlotte’s games this season. The team hopes such stability will provide a boost.

“You ask any one of those guys who are consistently playing every minute of every game, it just gives you an extra boost of confidence,” Lindsey said. “In the back of your head, that coach believes in you and they want you to keep playing because you’re an important part of the team.”

“I’ve built a personal relationship with them, but once we come out here on the field that goes out the window and we’re out there to win,” Walkes said. “So I’ve got a little bit more extra motivation. Nothing will be more enjoyable that leaving here with three points on Sunday.”

The teams combined to put 15 shots on goal in the first meeting. Martinez scored on a penalty kick for Atlanta and Adam Armour netted the equalizer for Charlotte, the first goal in franchise history.