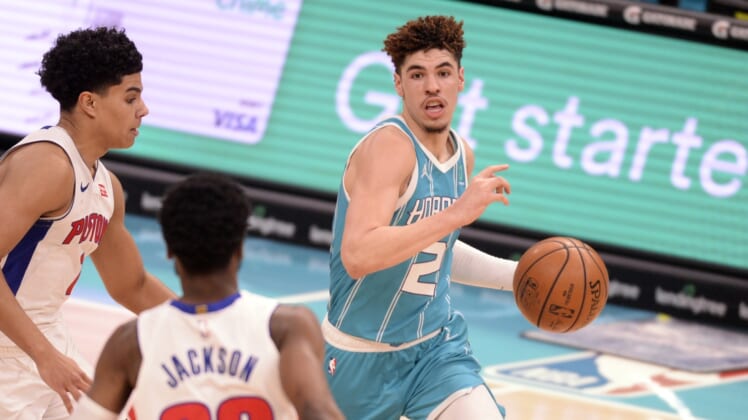 A 13-0 run in the fourth quarter, 29 points from Terry Rozier and the return of LaMelo Ball to the lineup powered the Charlotte Hornets past the Detroit Pistons, 107-94, Saturday in Charlotte.

The Hornets (31-32) led for almost the entirety of the game, but a 20-6 Pistons run from the late third into the fourth quarter pulled Detroit within three points.

From there, Charlotte took over.

Terry Rozier scored eight of his game-high 29 during the Hornets’ mid-fourth-quarter run, as Charlotte pushed its lead to 16 points.

Detroit (19-45) cut the margin back down to seven points with less than two minutes remaining, but Rozier knocked down two of his eight 3-pointers on consecutive possessions to effectively put the game away.

The Hornets also got three blocked shots from P.J. Washington, and two each from Ball and McDaniels.

Ball played a solid all-around game in his return from a wrist injury that sidelined him since March 20. He finished with 11 points, a game-high eight assists and seven rebounds.

Frank Jackson led Detroit with 25 points, and Saddiq Bey added 22. The duo combined for 11 of Detroit’s 13 made 3-pointers.

Josh Jackson, one of Detroit’s more reliable scorers at 13.6 points per game, went 2-of-10 from the field and finished with five points.

The Pistons were without season-long leading scorer Jerami Grant.