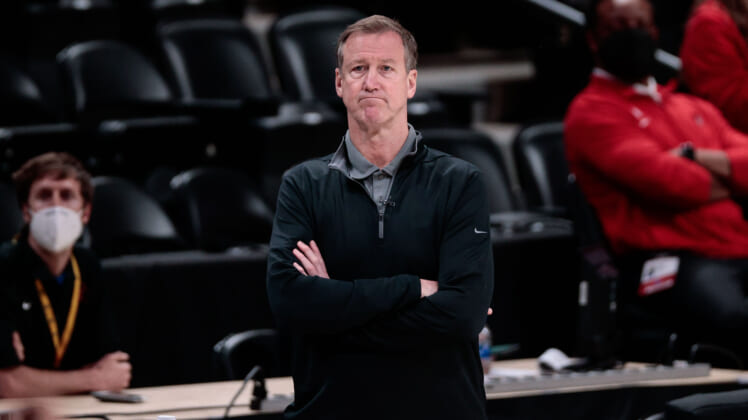 Each NBA offseason, the head coaching wheel begins to spin. For the Charlotte Hornets, that process has begun to take shape, having interviewed several new candidates to take over for James Borrego starting next season. We now have another name to add to the list, with Terry Stotts reportedly getting a chance to interview for the open position, according to Shams Charania of The Athletic.

Most remember Stotts from him helping lead the Portland Trail Blazers to a playoff appearance in eight consecutive seasons thanks in large part to strong play from Damian Lillard. Now the Hornets might be looking to re-create a dynamic duo in Charlotte, by seeing what Stotts can get out of the 2021 NBA Rookie of the Year, LaMelo Ball.

Yet, Stotts isn’t the only one set to interview with the Hornets this week. There’s also another experienced NBA assistant who’s generated some buzz in Charlotte.

Charania also added in a later tweet that current Milwaukee Bucks assistant coach Darvin Ham will meet with the Hornets for what will be his second in-person interview with the team.

Ham is most known for his eight seasons playing in the NBA from 1996 to 2005. In that time, Ham won an NBA Finals with the Detroit Pistons.

Since his retirement from his playing career in 2008, Ham became an assistant coach, where he’s worked his way up the ranks, first starting out in the G-League.

Ham’s first NBA coaching gig came with the Lakers in 2011, where he worked for three seasons. He later worked with the Atlanta Hawks from 2013-18, but has been with the Bucks ever since.

Having been a part of the championship effort from a year ago, Ham is seen as a top assistant around the NBA. Ham has a strong work ethic and has a great knowledge of the game, but it remains to be seen what type of offense he has in mind for the Hornets.

Now that the Bucks are eliminated from playoff contention, it’s possible we see teams move quicker to hire Ham with his schedule much more clear at this point. Despite an earlier report suggesting Mike D’Antoni was the current favorite, with Ham getting a second look, maybe we have a new frontrunner emerging.