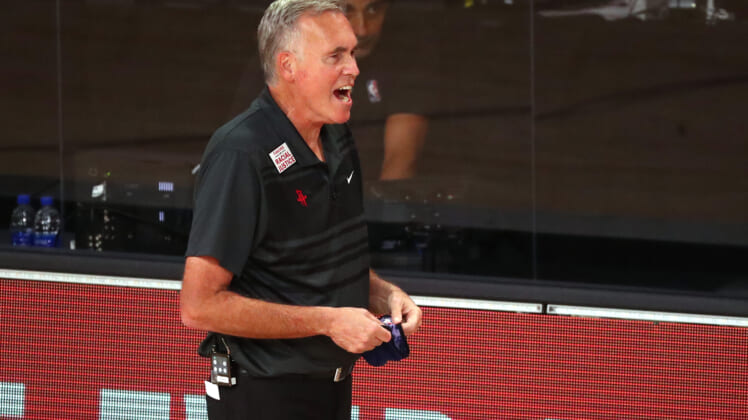 The 2022 NBA Playoffs are in full swing, with teams now in the second round of play. But for the organizations who came up short, like the Charlotte Hornets, they’re doing everything they can get over the hump.

Since being eliminated in the play-in round for the second consecutive year, the organization decided to part ways with James Borrego, placing them among the teams currently in need of a new head coach.

Now we’re beginning to hear some of the names linked to the Hornets’ head coaching vacancy and the list includes several familiar faces around the NBA.

According to Adrian Wojnarowski of ESPN, the Hornets are set to interview Kenny Atkinson, Darvin Ham, Sean Sweeney, and Mike D’Antoni, among others.

Though D’Antoni is not currently on a coaching staff, his L.A. ties to general manager Mitch Kupchak could work wonders with the Hornets this time around.

While this is the initial list Woj has revealed, it’s possible there are other candidates the Hornets would like to talk with in addition to the names above.

One other candidate who could still emerge is Mark Jackson, who LaMelo Ball is believed to have an interest in according to Jake Fischer of Bleacher Report. Jackson, who may be emerging as the frontrunner for the Sacramento Kings’ head coaching vacancy, could become a popular interview during this round of job openings. Fischer adds that the Lakers, specifically LeBron James still has an interest in Jackson replacing coach Frank Vogel as well.

There’s no telling just how quickly the Hornets are looking to move forward with their interview process, but they appear to have their initial list of preferred candidates. Maybe their eventual head coach will emerge from this group. Whoever gets the job will be taking over a youthful roster with plenty of upside, which should make the gig one of the most attractive openings in basketball.